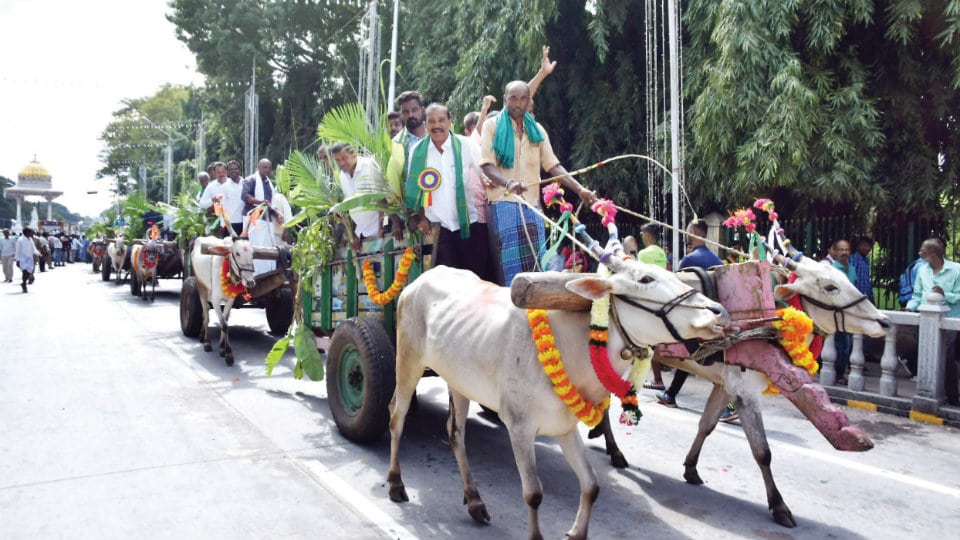 Mysuru:  A grand procession, in which hundreds of farmers in all their hues took part, marked the inauguration of the three-day ‘Raitha Dasara’ event in city this morning.

Minister for Fisheries, Muzrai and Ports Kota Srinivas Poojari flagged off the procession at Kote Anjaneyaswamy Temple at the Palace North Gate.

Later, speaking at the stage programme at MMC&RI auditorium, Poojari said that the Nada Habba has its rich heritage and tradition that are being followed for decades.

Highlighting the importance of Raitha Dasara, he said that Chief Minister B.S. Yediyurappa must be credited for presenting the historical Farmers’ Budget when he became the CM for the first time 10 years ago.

Maintaining that the BJP Government was committed for the welfare of farmers, he said it was working out plans that would help farmers augment their income.

Underlining the measures taken by his Department for boosting the Fisheries sector, the Minister stressed on the need for tapping vast opportunities in Sericulture, Dairy Farming, Sheep Rearing, Poultry etc.

MP Pratap Simha, MLA L. Nagendra, ZP President Parimala Shyam, DC Abhiram G. Sankar and others were present. Interestingly, Chamarajanagar MP V. Sreenivasa Prasad, who was scheduled to inaugurate the  procession, was conspicuous by his absence. Sreenivasa Prasad has so far abstained from all Dasara meetings and events.

The three-day event, which features various sessions, interactions, demonstrations etc., on a whole range of farm issues, will conclude on Oct.3.

A total of 15 farmers, who have excelled in different fields of the farming sector (three each from Sericulture, Horticulture, Forestry, Dairying and Pisciculture) were felicitated.

Also, H.J. Harish of Hebbal in K.R. Nagar taluk, K. Dhanraj of Kestur Koppal in K.R. Nagar taluk and Mahadevaswamy of Moogur in T. Narasipur taluk, who were the top growers of paddy in that order in the district, four top ragi farmers and three paddy growers, who recorded the highest yield at the taluk level, were also felicitated on the occasion.