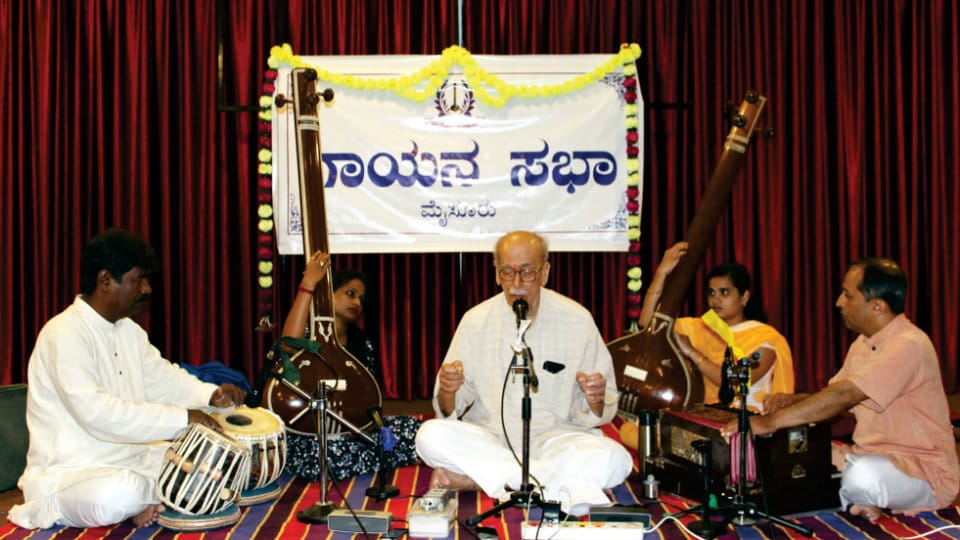 The two recent music programmes held in Mysuru were very pleasing, impressive and worth remembering. One was a veena recital and the other was a lecture-demonstration. Ganabharathi and Gayana Sabha were the organisers respectively.

This program was in memory of Vid. Swaramurthy V.N. Rao, grandson of Veene Seshanna. Swaramurthy, a vainika and a gayaka, was an accomplished pianist too. A diploma holder in western music from the Trinity College of Music, London, he has the credit of composing a ‘Saptha Thaleshwari Varna’ too.

Rajalakshmi began the concert with the same Varna in Shankarabharana Raga. Her prelude to the Varna confirmed the Mysuru style of playing that was to follow. The Varna had rich touches of Western chords in the swaras that were played perfectly by her.

After paying obeisance to Lord Vighnesha in ‘Panamamyaham Shri Gowrisutham’ (Gowla – Mysore Vasudevacharya) and decorating it with rare pattern of Kalpanaswaras, Rajalakshmi continued to play the evergreen composition of Muthuswami Dikshitar ‘Akhilandeshwari’ in the Raga Dwijavanthi.

Seshanna has composed Keerthanas in rare ragas. One such is ‘Ubhaya Kaveri Ranga’ in Gamanashrama. Rajalakshmi mesmerised the audience with her calm and composed delineation of the raga. The raga bhava was expressed very well in the phrases in the lower octave. Totally, a majestic ragalapana in which, every note was emotionally charged. The Kruthi was decorated with bright and vibrant kalpanaswaras.

The main raga of the day was Rishabhapriya. This 62nd Melakarta raga has a beautiful combination of swaras that has a tranquillising effect. Rajalakshmi’s mood was apt for it and both the alapana and the taana did create a serene effect. Mysore Vasudevacharya’s composition ‘Mahathmule Teliyaleru Rama’ was the right choice. The soft strokes by Cheluvaraju enhanced the musical experience. Cheluvaraju is one of the rare artistes who has mastered the technique of playing mridanga for a soft instrument like veena. It was a pleasure listening to his muktayas. The Taniavarthana between him and Manjunath was enjoyable.

‘Gayana Sabha,’ the institution that encourages Hindustani music, had organised a lecture-demonstration at ‘Kalpa Kshetra,’ the newly established auditorium in Vijayanagar 1st Stage on the 26th of September.

Pt. Nirody is one of the rare Gurus who is ever ready to part with his vast knowledge. His concerts are the best example for this.

There are certain rules in presenting the ragas in Hindustani music just as in Karnatak music. ‘Chalan’ and ‘Pakkad’ are included in them. They are the factors which define and decide the movement of notes in a particular rag.

Though different ragas derive from the same ‘Thaat,’ they differ in the ‘chalans.’ Some ragas, despite having the same scale, are identified with their ‘chalan.’ Such is the importance of chalan in North Indian music.

Pt. Nirody had chosen Rag Puryadhanasri and Purvi to begin his lecture-demonstration. He explained very clearly and accurately how the cluster of notes like ‘marigaa-risa’ changes its effect totally when it becomes (sung) ‘maa-rigarisa.’

He also sang two bandish ‘Payaliyajhankar’ and ‘Banatabanaavo ban nahiaave’ for the pleasure of rasikas.

He explained the characteristic feature of Indian music in using the notes. Notes always are sung with the support of another note.

The artiste should be well aware of its usage, like how lengthy or short it should be, how much of stress to be given, to make it more attractive.

The definite methodology of expanding a rag that is prevalent in Dhrupad style of singing was demonstrated by Panditji.

Sthayi-antara-sanchari and aabhog are the four steps in developing a rag which was clearly demonstrated. It was interesting to note the entry of ‘Jhala,’ the instrumental technique influenced the vocal music too. It was adapted by vocalists and has blended beautifully.

Another interesting point he explained was how the natural notes like Pancham and Shadja in aaroha loses their importance in the presence of Teevramadhyam and Nishada respectively.

He demonstrated it in Rag Yaman. Rag Bhoopali and Deskaar both have the same notes. But their Varnan or combination  differ. While Bhoopali developed itself in aarohivarnan and uses more of Kalyaniang and must be sung in the evening, Deskar has Belavalang and avarohan is imporatant and is a morning rag. Pt. Nirody said that the artiste should be sensitive enough to be aware of many nuances like which note to be used to glide from, the pause between the notes and the amount of force to be given to a note. All these are inseparable parts of the Chalan in a rag.

He chose Rag Lalith to demonstrate the different classes among notes (Kanswara). This may be in a single rag or different Ragas. He ended the session with a wonderful rendering of Rag Darbari.

Thanks to Gayana Sabha for arranging such an informative and educative programme.