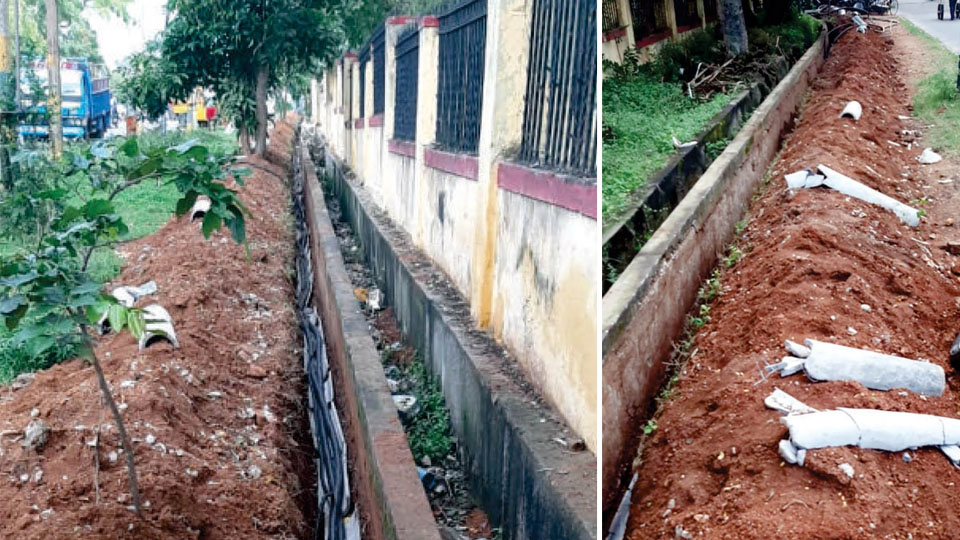 Mysore/Mysuru: In a bid to make Mysuru overhead power lines-free, Chamundeshwari Electricity Supply Corporation (CESC) has undertaken underground power cable laying works across the city at a total cost of Rs. 600 crore and the public are accusing CESC of undertaking substandard works, which could prove danger in future.

In the first phase, laying of underground power cables was taken up at a cost of Rs. 300 crore, which was undertaken by Asian Fab Tech Limited (AFTL) and Larsen & Toubro (L&T). While undertaking the works, UGD pipes and drinking water pipes at many places were damaged. Hence to lay low tension lines, trenches were dug up on roadsides and power cables were being inserted into concrete pipes and were then being laid underground.

But the public have alleged that nearly 50% of concrete pipes were already broken before being laid underground, which shows the substandard works undertaken by CESC. The low tension line works are undertaken from Kautilya Circle near Crawford Hall towards Kukkarahalli Lake till University Pavilion Grounds, the public said and alleged that low quality broken concrete pipes were being used for the works.

Workers from other States

The public also alleged that labourers from other States and vehicles were being utilised for the works when there were thousands of labourers in city, who have been rendered jobless due to COVID-19 pandemic.

They urged the authorities concerned to instead give preference to locally available labourers in future.