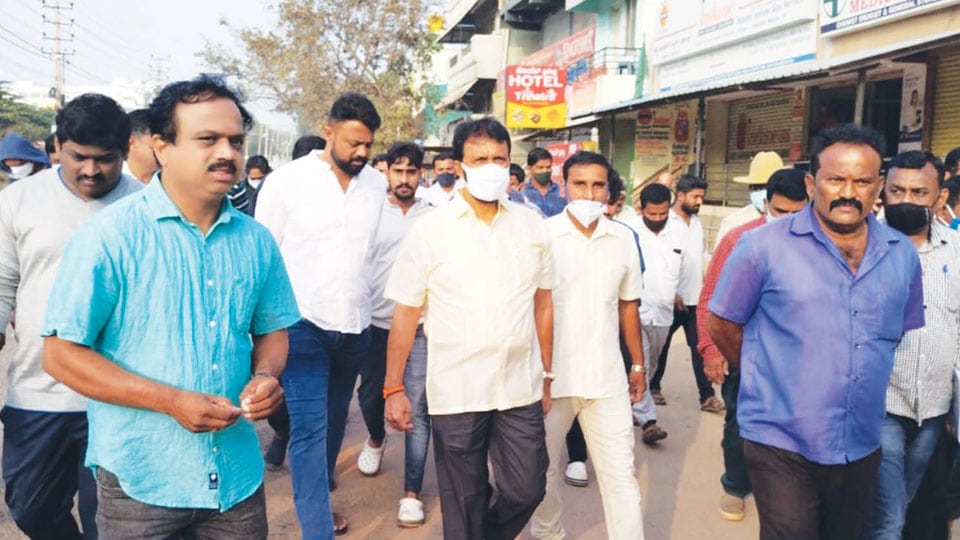 Mysore/Mysuru: Chamaraja MLA L. Nagendra took out a padayatra in his constituency on Friday to inspect the ongoing or carried out works and also to hear public grievances.

Beginning his padayatra from Trinetra Circle, Nagendra inspected road development works in Mahadeshwara Layout, which is taken up at a cost of Rs. 1.5 crore out of the State’s SFC grant.

Later the MLA inspected road asphalting works on several cross roads of the locality being executed at a cost of Rs. 34 lakh, construction of drain and deck at Kidaganamma block, construction of Kodagu Gowda Samaja building and temple development works being taken up under Aradhana Scheme, among others.

During the padayatra, many residents complained about waste disposal, following which he directed the MCC officials to take necessary measures for waste clearance and disposal.

A few residents complained about leaking roof of JnURM complex in Dongri Colony of Mahadeshwara Layout, following which the MLA directed the Karnataka Slum Clearance Board officials to fix the problem.

Nagendra also received complaints that the park in Railway Layout had become a haven for illegal activities. The MLA directed the jurisdictional Police to take necessary action in this regard. He also directed PWD officials to immediately start road development works that have been accorded sanction.