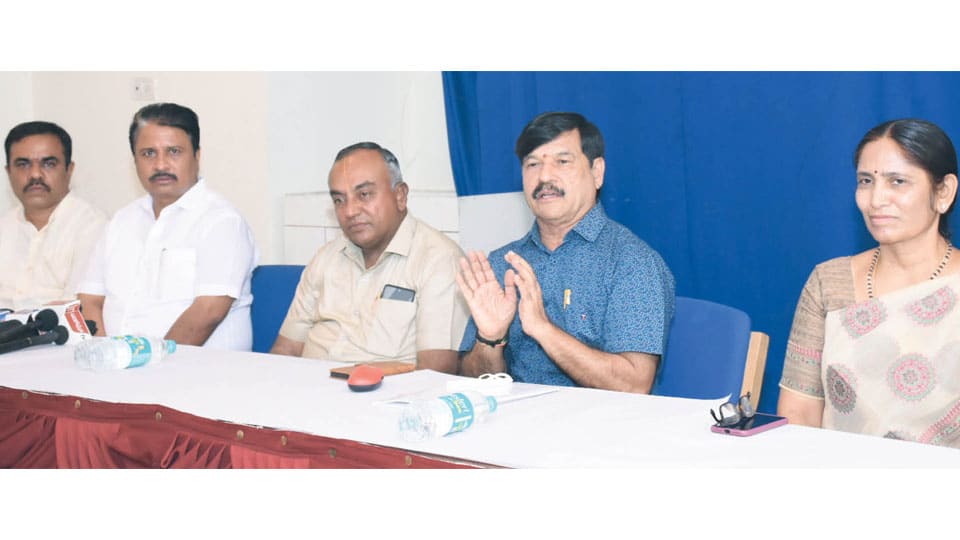 Mysore/Mysuru: Maintaining that the 4-day Job-Generation and Skill Training Mela that was held at different venues in Krishnaraja (KR) Assembly segment from Jan. 4 to 7 attracted over 65,000 aspirants and budding entrepreneurs from across the district, KR MLA S.A. Ramdas said that about 27,500 of them (15,000 at the venues and 12,500 during door-to-door visit by party works) have registered for jobs and skill training of their choice.

Addressing a press meet at Hotel Siddharta here this morning, Ramdas said that the four-day Mela that was organised in association with Education, Industries, Skill Development, Labour, Co-operation, Horticulture, Tourism and Animal Husbandry Departments, was a huge success.

Pointing out that the 20-day ‘Modi Yug Utsav’ that he had organised in the city in September-October last marking the 71st birthday of Prime Minister Narendra Modi and 75th year of Indian independence, saw the participation of over 25,000 school children aged over 13 years, he said that the Utsav too was a bit hit among youths as they showed tremendous interest in registering their profession or vocation of their choice for getting trained in that.

Referring back to the 4-day Job-Generation Mela, Ramdas said that about 15,000 school children in the age group of 15 to 18 years were vaccinated during the Mela. The KR Constituency has recorded 98 percent achievement in vaccination of 15-18 years age group, he added.

Continuing, Ramdas said that a 25-page booklet explaining the activities and programmes that were part of all the Melas that he had held so far in the past four years will be presented to Chief Minister Basavaraj Bommai at the CM’s Home-Office Krishna in Bengaluru on Jan. 12.

The CM will also be presented with another book that contains (Ramdas) suggestions based on his experience on making some changes for more effective and wider implementation of 182 Central Government Schemes.

The CM will also launch a KR Constituency specific website that contains details of all development works and issues concerning the constituency on Jan. 12, he added.

“Seeing the success of the Job-Generation Mela, I have planned to organise similar Melas at all taluk headquarters of the district in the days ahead,” he said.

Replying to a question on whether he was an aspirant for a Ministerial berth, Ramdas asserted that he was not in wait to become a Minister. However, he was ready to accept any role that the party assigns him, he said and added that he will continue to work as an ordinary party worker, whether he was inducted to the Cabinet or not.