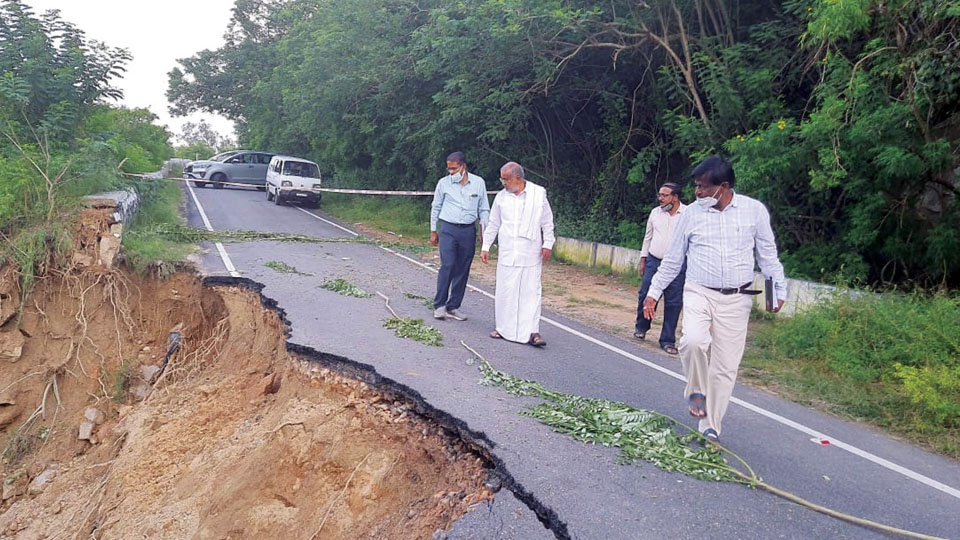 Netas, officials focus only on development but silent on conservation, green cover

Mysore/Mysuru: A portion of Chamundi Hill collapsed on Wednesday night, exposing the callous nature of the official machinery and elected representatives. Though formal press releases were issued to convey the ‘concern’ of the Government for ‘immediate repairs and restoration,’ the political statements did little to cover the apathy.

When a landslide occurred on Oct. 22, 2019, the then Mysuru District Minister V. Somanna had asked the Public Works Department (PWD) to construct a cement retaining wall and at the same time conduct a comprehensive survey of all the vulnerable points where there are chances of potential landslides. Though the officials nodded to the Minister’s words, nothing of that sort was done.

After the concrete wall was constructed at an estimated cost of Rs. 49 lakh, the issue was forgotten and the Chamundi Hill safety was put into the backburner. Officials and elected representatives conveniently forgot the issue and talked about more and more development works up the Hill ­­— including construction of a ropeway — to attract more tourists and in turn convert the green hill to a concrete jungle.

After last Wednesday’s collapse, again ‘instructions’ were issued to District and PWD officials to conduct a ‘comprehensive’ survey to identify all the vulnerable spots up the Hill that are prone to landslides. How far the officials will go to conduct a survey is anybody’s guess.

Forget a comprehensive survey but even a casual visit to the Hill reveals many gaping holes in the retaining wall that is more than 100 years old and till now, no concrete measure has been taken to assess the strength of the old retaining wall.

Though the Hill (3,489 ft above sea level) and Sri Chamundeshwari Temple is in the itinerary of every VIP, VVIP and tourist who visit Mysuru and the Temple is one of the richest Government-controlled Temples in India,  the route to the Temple via the Hill has been neglected and straight-jacket solutions are provided only when accident occurs.

As the stone retaining wall is more than a century old, stones have fallen at several places and wide cracks have developed all along. With absolutely no maintenance, water streams cut through the retaining wall after rains where the water flows from the Hill to the foothill, loosening the earth. The last two landslides have occurred due to loose soil.

Even at viewpoints and around the tourist Gopura, stones have collapsed and cracks are visible. At a distance of one kilometre from the Temple, the retaining wall has collapsed and till now no effort has been made to restore the gaping areas.

Though environment-conscious citizens have repeatedly demanded conservation and a deep study of the fragile ecosystem and soil, not even once the Geological Survey of India (GSI) has been asked to submit a detailed study report.

There are allegations that after the first landslide in 2019, the officials did not consult GSI experts before constructing the concrete retaining wall though they have claimed to have consulted them. Now with the second landslide, there is a demand for a detailed GSI survey of the Hill and strict adherence to their recommendations.

Pleas to declare a buffer zone around Chamundi Hill and freeze new development projects have fallen on deaf ears and only recently, some of the elected representatives had sought additional facilities including dormitories and guest houses on top of the Hill based on Tirupati model.

Officials and elected representatives have failed to realise that such development works will only jeopardise the green cover and destroy the rare flora and fauna of the Hill, a biodiversity hotspot for hundreds of species of birds and butterflies apart from a large population of leopards, reptiles and insects.

Meanwhile, Public Works Minister C.C. Patil has instructed the PWD engineers and officials to visit the spot and submit a technical report. Engineers have been directed to assess the ground situation and identify the other road stretches that could cave in because of the loose soil condition.

Chamundeshwari MLA G.T. Devegowda visited the Hill last evening and asked the officials to prepare an estimate of the new retaining wall and submit the same to the Deputy Commissioner for approval and clearance. He said that he has already spoken to Cooperation and District Minister S.T. Somashekar and also to the PWD Secretary Krishna Reddy to sanction funds for immediate repairs.