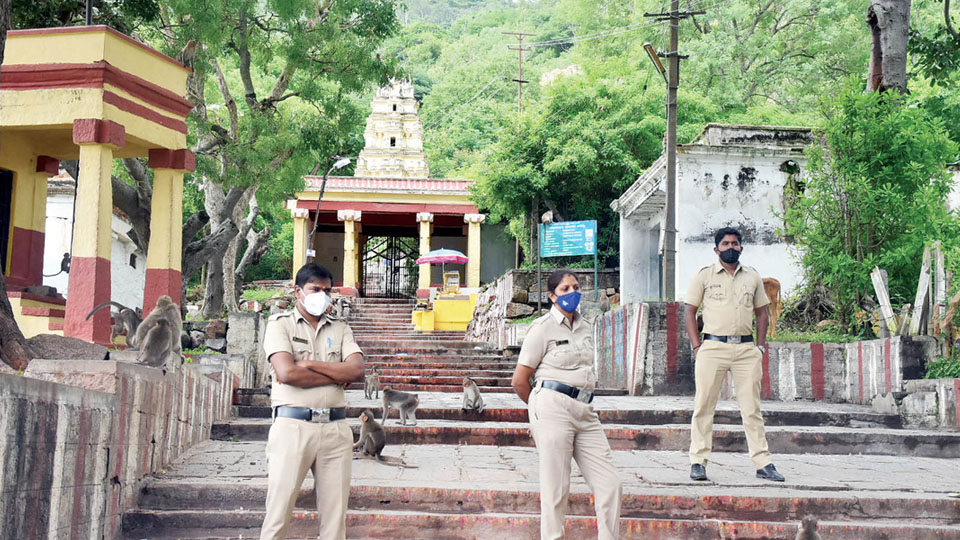 First Ashada Friday 2021: Only VVIPs have darshan of Goddess

Mysore/Mysuru: Amidst a huge public outcry that only VVIPs and celebrities are allowed atop Chamundi Hill to offer their prayers to Goddess Chamundeshwari on the auspicious occasion of Ashada Shukravara while the entry of common man is banned due to COVID, all entry points to the Hill Temple including the sides of the gates through steps were closed this morning. However, a couple of VVIPs still managed to sneak into the Hill Temple by road as the gates were open for their convoys. They were also welcomed by their supporters and villagers of Chamundi Hill Gram Panchayat, numbering over 200. But entry of other devotees was prohibited.

Early morning today, the VVIPs Urban Development Minister Byrathi Basavaraj, Mysuru District Minister S.T. Somashekar, MLAs G.T. Devegowda, S.A. Ramdas, MLC A.H. Vishwanath and Hassan MP Prajwal Revanna went to the Temple and had  darshan of the presiding deity. After their ceremonial rituals, the doors of the Temple were shut and no other devotee was allowed.

Today, July 16, is the first Ashada Shukravara (Friday) and the District Administration has banned the entry of devotees. Starting today, special Ashada pujas will be held every Friday of the Ashada month on July 23 and July 30 and Aug. 6. July 30 is also the Vardhanti (birthday) of Goddess Chamundeshwari. The bheemana amavasya puja is on August 8 and the ban will be in force till then.

Devotees are also barred from visiting the temples on weekends, Sundays and general holidays during the period. However, the Temple will remain open for darshan on other days of the week. Entry of devotees has also been banned to Tripurasundari Jwalamukhi Devi Temple at Uthanalli.

Due to the entry ban, all the roads leading to the Temple even from the steps were barricaded at a distance of 500 metres to prevent devotees from sneaking into the Temple. Police were deployed to prevent the devotee entry at any cost.

Several families who had come for darshan were turned away. They weren’t even allowed to perform pujas at the foot of Chamundi Hill. Instead, they were asked to do the rituals below the Ashwatha Katte near the foothill.

The rituals of the ceremonial Utsava after the pujas were, however, cancelled as it was raining. According to the priests, the Utsava, where the Utsava Murthi of the Goddess is taken out in a procession around the Temple premises, cannot be conducted when it is raining. The Utsav will be held today evening and here too, devotees will not be allowed.