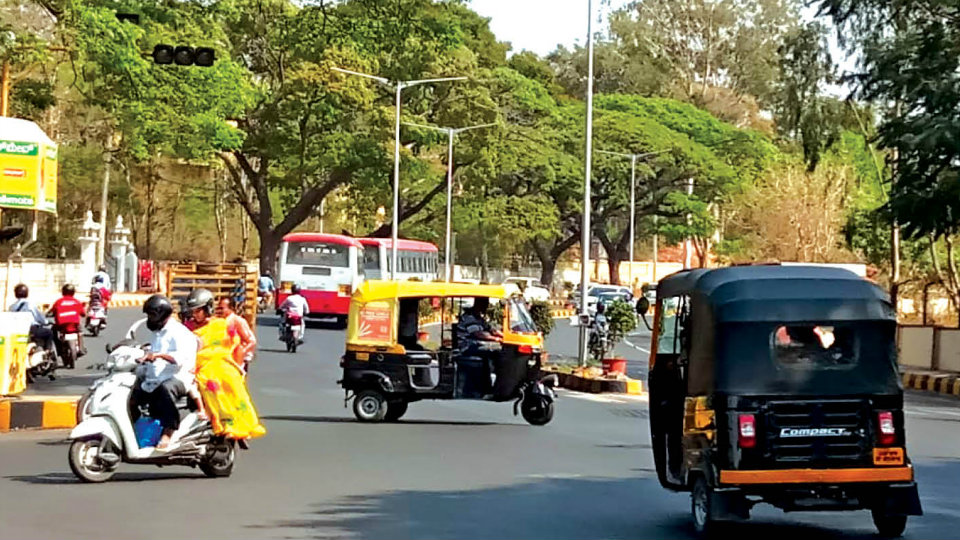 Mysuru: Several non-working traffic lights at some of the busiest traffic intersections in city are leading to chaos as these junctions have become traffic signal-free, making life miserable for road users and pedestrians.

The chaos is evident all through the day especially in the morning as vehicles cross each other in a disorderly manner, resulting in frequent traffic jams. At times, vehicles brush against each other leading to verbal duel among motorists. Such scenes are witnessed on the ever busy Hunsur Road-Valmiki Road junction and at Akashavani Circle almost every day.

There is heavy movement of vehicles especially buses and goods vehicles on Hunsur Road as the stretch leads to Hassan, Kodagu and other places.

Added to this, there is Maharani’s Commerce College just a few metres from the Hunsur Road-Valmiki Road junction and hundreds of students use this road to reach their College. Absence of traffic signals is posing a danger to the students and also other motorists.

Traffic jams on this busy junction is worse at the time of opening and closing of schools, colleges and offices.

At the Vontikoppal Sri Lakshmivenkataramanaswamy Temple Circle (B.C. Lingaiah, Chikkannadasa Circle), some of the green lights are not working since weeks and this confuses motorists whether to stay at the crossing or move. Usually they are forced to move owing to continuous honking from motorists from behind.

“We have been forced to cross the circles to reach another side at high risk as two-wheelers, autorickshaws and other vehicles coming from different directions pass through these roads at high speed,” said a pedestrian.

Despite several complaints, the authorities have not taken any steps to correct the signals and ensure the smooth passage of traffic. At the Akashavani Circle (Ta.Ra.Su. Circle), the traffic signal light is defunct since many days and has not yet been repaired. Here too, traffic chaos is witnessed every day.

Though the Traffic Police regularly check vehicles at the nearby Cheluvamba Park and penalise motorists for violating traffic rules, they have not bothered to get the defunct traffic signal lights repaired. “Traffic Cops along with three or four Home Guards are busy in only collecting fines near Cheluvamba Park and so far they have not bothered to regulate traffic at the Circle,” said Jagadeesh, a commuter.

Authorities concerned are urged to get the defunct traffic signal lights in city repaired at the earliest without waiting for accidents to happen and help in the smooth movement of traffic.

3 COMMENTS ON THIS POST To “Chaos on Mysuru’s busy junctions; Defunct traffic lights to blame”