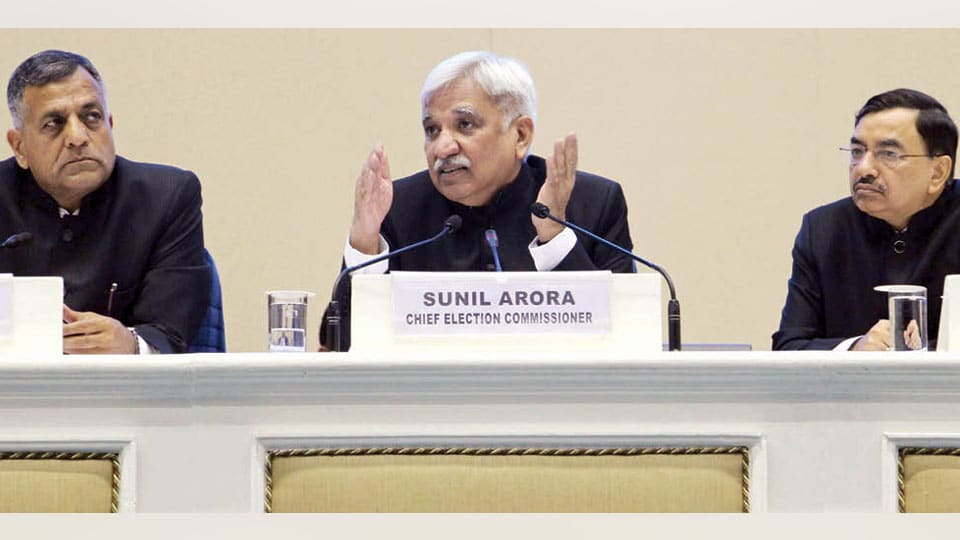 90 crore people eligible to vote; VVPAT units to be used in all polling stations

New Delhi:Elections to the 17th Lok Sabha will be conducted in seven phases across the country from April 11 to May 19. The counting of votes will be on May 23, the Chief Election Commissioner (CEC) Sunil Arora announced last evening.

The Model Code of Conduct came into effect immediately on the announcement of the schedule, with the Election Commission introducing fresh measures to enhance the integrity of the electoral process and raise the accountability of campaigners.

Addressing the media at Vigyan Bhavan, Arora said voting across the country would be held on April 11, April 18, April 23, April 29, May 6, May 12 and May 19. The Assembly election in Andhra Pradesh, Arunachal Pradesh, Sikkim and Odisha will be conducted simultaneously with the Lok Sabha election. However, the EC is yet to take a call on the Assembly election in Jammu and Kashmir owing to the security scenario.

The CEC said there would be more than 10.35 lakh polling stations, 10% higher than in 2014. Voter Verifiable Paper Audit Trail (VVPAT) machines, a total of 17.4 lakh units, will be used for the first time at all stations. He said the standard operating procedure for the security of EVMs and VVPATs had been revised to ensure that their end-to-end movement was monitored through the GPS-fitted transport vehicles.

The election expenditure ceiling is largely Rs. 70 lakh for candidates contesting Lok Sabha elections, except in Arunachal Pradesh, Goa and Sikkim where it is Rs. 54 lakh.

The Lok Sabha elections will see Prime Minister Narendra Modi leading the ruling Bharatiya Janata Party and its allies in seeking a renewed mandate to remain in power for another term of five years. The Congress, led by Rahul Gandhi, is the principal challenger to the ruling BJP-led National Democratic Alliance (NDA). The grand old party, which was voted out of power in 2014, is trying to stage a comeback and already entered into alliances with like-minded parties in some States.

The Opposition parties are also trying to cobble together a national coalition, but mutually conflicting political interests in the States are coming in  the way.