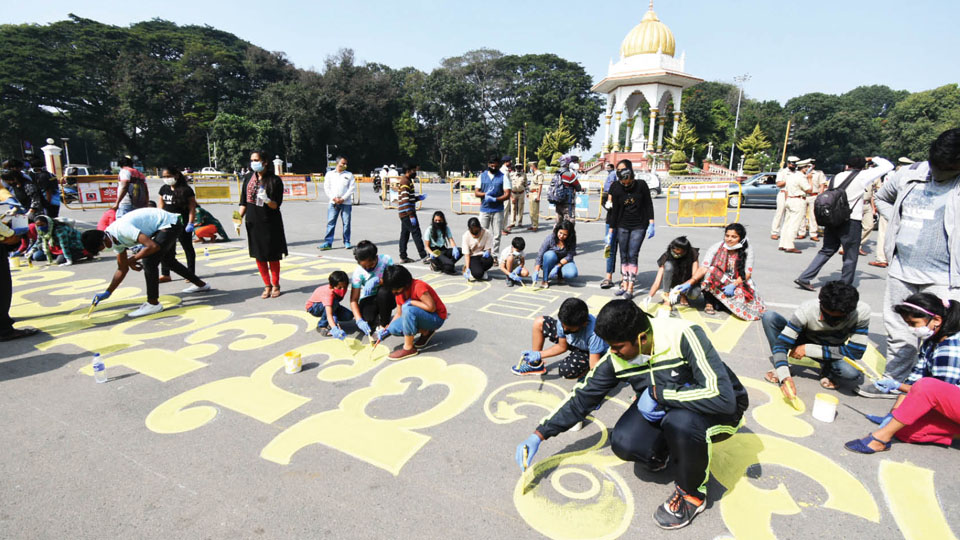 The event, in which select School and College students and volunteers of several organisations participated, was organised in association with the city’s  Kreatement Events and The Thought School.

The students drew educative messages cautioning the people against unnecessary open display of jewellery, sharing of OTP (one time password) with others, drunken driving etc.

Speaking after inaugurating the event, City Police Commissioner Dr. Chandragupta said that people must follow advisories of the Police for their own safety and security. Noting that open display or flaunting of jewellery will attract chain snatchers and other thieves, he said that the general public must be wise enough not to share their OTP with others for any reason.

Expressing concern over rising cyber crimes, he observed that sharing of OTP was the main reason for the occurrence of such crimes as miscreants after getting the OTP, will hack the bank accounts of people who shared it within no time.

Explaining the objectives of observing Crime Prevention Month, Dr. Chandragupta called upon motorists to strictly follow road traffic rules and regulations. Warning the people against drunken driving, he said it was important for all motorists to maintain road traffic discipline. The Police Commissioner sought the co-operation of the public in making the Crime Prevention Month a huge success.

From Saturday, the city Police  Control Room (PCR) has got a new number -112. Pointing out that the old number of 100 has been replaced by 112, Dr. Chandragupta asked the public to call 112 from now on for seeking any emergency Police services. He further said that this new number has many features that will help Police to reach the spot of crime.

The messages drawn by students appealing the people not to unnecessarily display jewellery, not to share OTP and asking the public to follow lane discipline and other traffic rules, caught the attention of public.