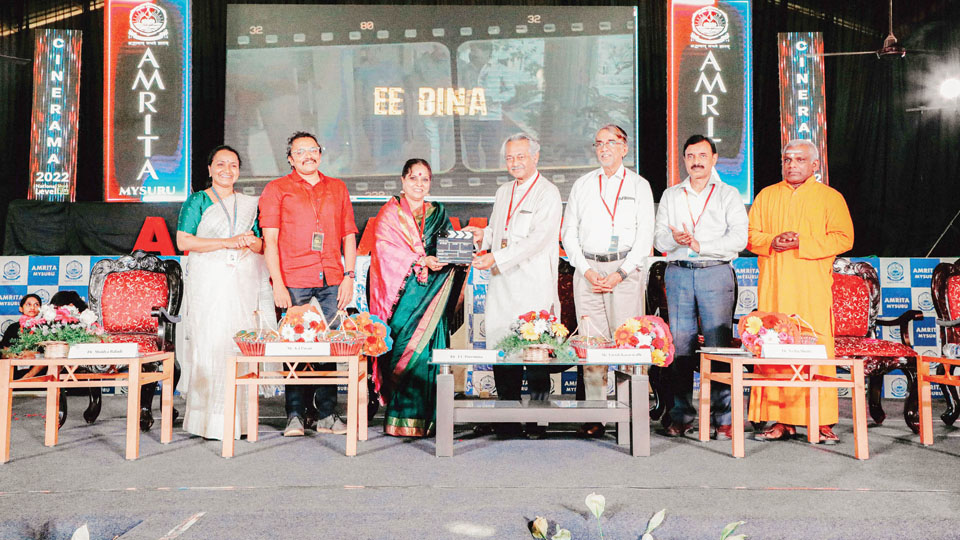 In the present era, feature films have lost the essence of story-telling and are more focused towards hero-centric roles whereas short films focus more on story and delivering the theme of the film in very less amount of time. Short films also play a very important role in delivering human values which helps in moulding our society, she added.

Citing the short film making trend that is set in, she hoped that more such films contribute towards the overall well-being of the society.

Guest of honour Dr. Na.Da. Shetty, Author and Kendra Sahitya Academy Awardee, in his address, called upon the young film-makers to be very meticulous with their planning and execution of their films.

Another guest of honour K.J. Pavan, Actor and Award-Winning Lens Based Artiste, advised the participants to make the best use of such professionally driven programmes.

The technical sessions on “Screen Writing and Direction” by Adarsh Eshwarappa, Film Writer, Editor & Director and “Aesthetics in Film-making” by Abhaya Simha, Film-maker and Screen Writer that followed benefited the participants in understanding the various nuances of film-making.

Girish Kasaravalli, speaking on his experience of film-making, clarified that the sole purpose of his films is not to entertain the audience, but to engage and enlighten them.

According to him, the purpose of cinema doesn’t end with telling a story but it has to develop a dialogue. Cinemas should not manipulate the minds of the people rather, it should serve as medium to provoke audience to think, he opined.

Girish Kasaravalli advised the young cinema makers to break the age-old models and notions of cinema making and experiment with fresh minds. Throwing light on film technique and film language, he advised the participants to try to convert the technique into cinematic idiom.

Watching of a movie should make the audience politically aware of how our mind is being ruled/ colonised/ captured and not able to accept descent, he added.

Responding to several questions related to his film-making career, his preparation for film-making and his stand on purpose and objectives of films, he emphasised on the need for thorough knowledge on film theories for an upcoming film-maker.

The overwhelming response from the budding film-makers from various States of the country and abroad crossed 75 entries from over 50 institutions and University. As part of the event PixelKraft, Graphics and Portfolio Exhibition of final year students of the institution was also inaugurated by Girish Kasaravalli.

Valedictory and Award Ceremony of Cinerama-2022 was held on Apr. 9.

Amrita Vishwa Vidyapeetham Dr. T.C. Poornima Girish Kasaravalli
Hubballi-Mysuru triweekly Indigo flight from May 3
‘Success is not a destination but a journey’