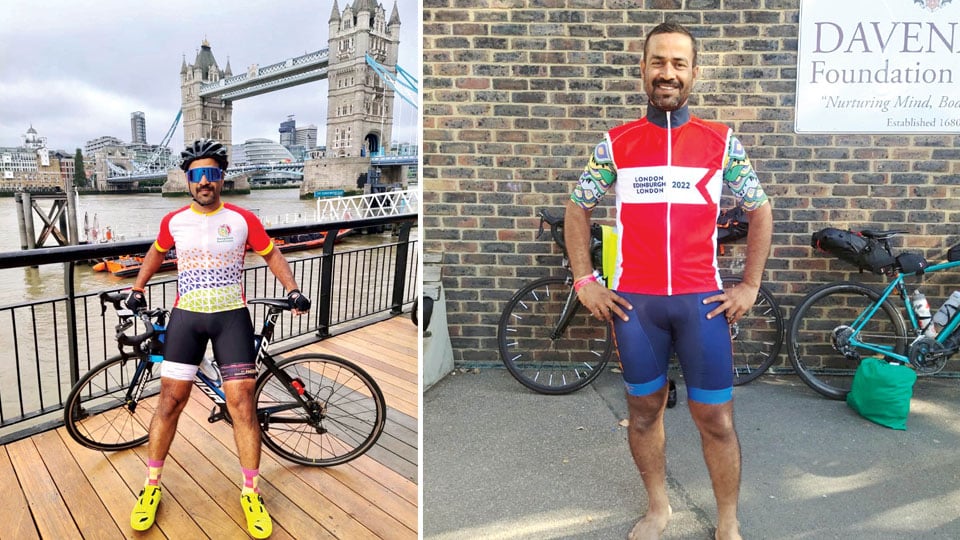 Mahesh Choudhary of Mysuru has become the first Mysurean to cycle London–Edinburgh–London, covering a distance of 1,540 kilometres (956 miles). He covered the distance in 110 hours and 54 minutes. The event began on Aug. 7 and ended on Aug. 12.

The event named ‘London–Edinburgh–London’ (LEL) is a randonnée bicycle event which means the cyclists have to cycle over  at least 200 kms within a specific time limit.

In this event, the cycling course is between the capital cities of London (England) and Edinburgh (Scotland). It has been described as a contender for the hardest cycling event in the United Kingdom.

The event has been held every four years since 1989. However, the 2021 edition was not held due to the COVID-19 pandemic. It is the flagship event of Audax UK and is held every four years, two years after Paris–Brest–Paris. It is part of the brevet series and is a non-competitive endurance bicycle event.

Speaking to Star of Mysore over the phone from London, Mahesh said that he finished the London–Edinburgh–London on Aug. 11 at 11.54 pm. The route started and finished at Debden in North London; the northernmost point is Dunfermline (north of Edinburgh, over the Forth Bridge).

Over 2,000 cyclists from across the world participated in the event. “It is an endurance ride and it is not easy as many give up even before they reach 200 kilometres. Every finisher has to finish on time and the finishing time makes all the difference here. 128 hours is the allotted time and I finished in 110 hours and 54 minutes. If they don’t finish under the allotted time they are disqualified,” he said.

“I feel proud of my timing,” he exclaimed. This is the third international cycling for Mahesh. He did his first international event Paris-Brest-Paris in 2019 covering 1,200-km and 2,024-km endurance cycling ride in Thailand in 2020.

Commenting about his training, he said that before the Paris and London event, he used to cycle 500 to 600 kilometres per week in and around Mysuru. “While preparation is the key to enduring long distances in different terrains, it is not only about strength and endurance. One needs immense patience to just keep pedalling on without any distractions,” he added.

Mahesh Choudhary is a resident of Ramakrishnanagar. “Riding was a hobby and a passion for me and I started with 50 to 100 kilometres. But as I continued to cycle, a deep desire of achieving something in cycling emerged. I began with smaller rides and slowly graduated to 1,000-km rides. Then I started cycling daily for a month, covering 100 kilometres daily, back-to-back and gradually, endurance was built,” Mahesh said.

“I have done five Super Randonnées (mountainous cycling of 600 km with over 32.800 ft. of elevation gain), I have been to Ladakh, Manali to Leh (Khardungla) in seven days. When there are no events, I just cycle to Ooty, places in Tamil Nadu and Bengaluru.