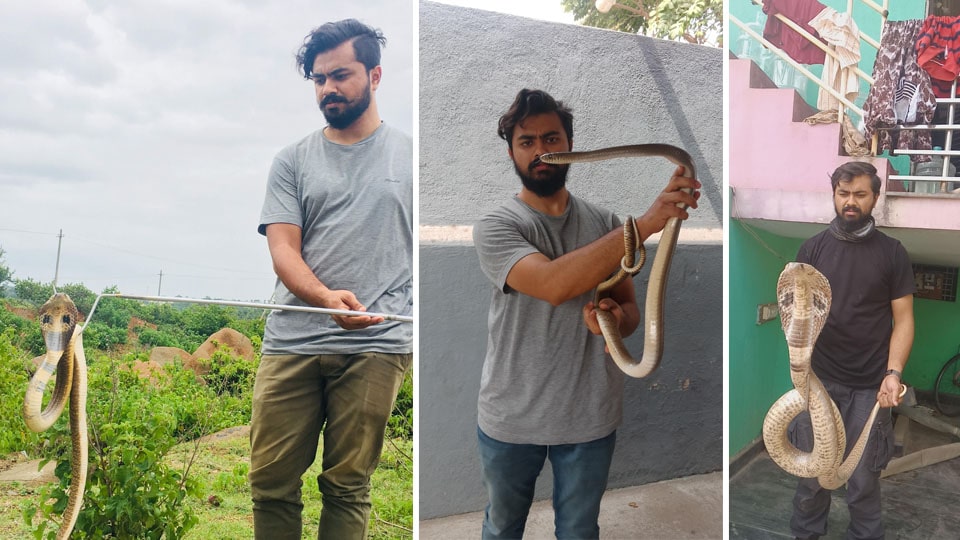 Mysore/Mysuru: Be it a Spectacled Cobra, Rat Snake, Krait, Viper etc., the tryst with birds and snakes of a Mechanical Engineering graduate from city, rushes him to the spot to rescue them with the recent rescue of a mother Russell’s Viper along with her 50 snake lets (baby snakes) at Ranganakoppal near Bilikere on Hunsur road.

The mother Viper and her babies were released into their natural habitat in the presence of two Forest Department staff under instructions from Deputy Conservator of Forests (DCF) Dr. K.C. Prashanth Kumar.

Meet Mohammed Umar Shariff, a Mechanical Engineering graduate from ATME College and a resident of Shivaji Road in N.R. Mohalla here. His first rescue was a Rat Snake eight years ago and the second was a Checkered Keelback. From then on there was no turning back and Umar claimed to have rescued about 4,500 snakes so far but has kept record of 598 rescues.

He said that his love for wildlife conservation made him a snake rescuer and added that he used to see many snake rescues and sometimes snakes used to disappear before the rescuer arrived, causing tension among the residents which also prompted him to rescue snakes.

He said “Snakes have been a part of my life ever since childhood. I actually don’t know how I fell in love with them. As a child I had seen people brutally killing snakes. That instilled sympathy for the creature in my mind.” Stating that snakes were beautiful creatures which are misunderstood, Umar said that snakes are killed due to fear and myths surrounding them.

He said that his aim is to mitigate human-snake conflict, avoid unnecessary deaths and foil the plans of self-styled faith-healers’ claims of “curing” people bitten by snakes that were not even venomous. “Everytime I rescue a snake, I inform the crowd about the snake, whether it is venomous or non-venomous, its behaviour and habitat. In this way I am helping the people identify the snake, so that they could inform any snake rescuer which specie of snake needs to be rescued,” he said.