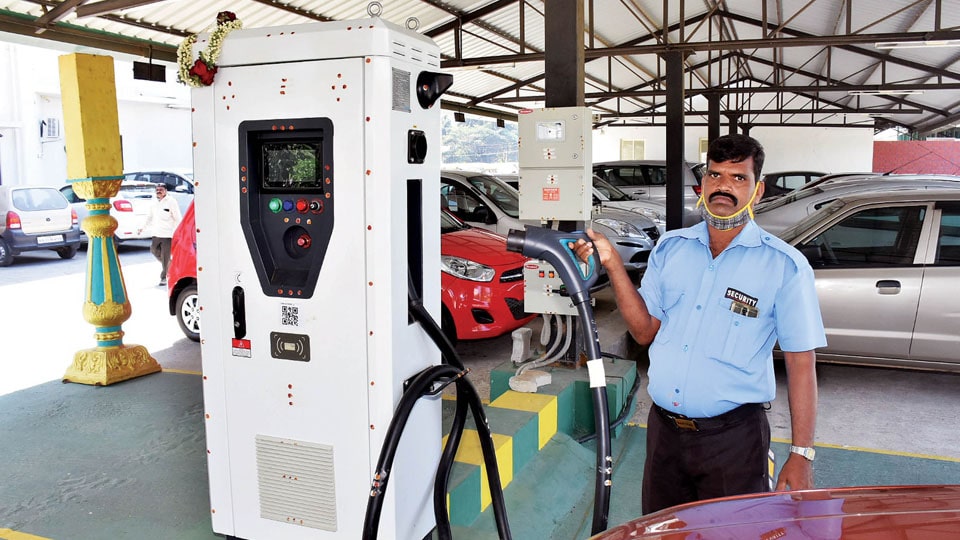 Two more to come up in Rajendranagar and Kuvempunagar

Mysore/Mysuru: Mysuru got its first Electric Vehicle (EV) Charging Station on the premises of Chamundeshwari Electricity Supply Corporation (CESC) at its Corporate Office in Vijayanagar, near Hinkal.

Though the charging station was set up nearly a month ago, it was formally inaugurated by CESC Managing Director Manohar M. Bevinamara yesterday. K.M. Munigopal Raju, Superintending Engineer, CESC and others were present on the occasion.

“We have opened the first EV charging station in Vijayanagar. Two more stations will be opened in Rajendranagar and Kuvempunagar soon,” Bevinamara told Star of Mysore.

The charging station had been established at a cost of Rs. 8 lakh by Energy Efficiency Services Limited, an entity promoted by the Union Ministry of Power, which has an understanding with the CESC. Charging of vehicles will be free for the first three months and thereafter, the rate will be fixed as per tariff suggested by Karnataka Electricity Regulatory Commission (KERC).

“We have extended support to the service provider by giving our land for setting up of the station. Our endeavour is to have such charging stations across the city to promote more and more people to use the green vehicles. The electric vehicle is the panacea for increasing fuel prices and checking air pollution,” the MD said.

At Vijayanagar Charging Station, there are three AC charging points and one DC point. “In coming days, Electric Vehicles may replace vehicles run on petrol or diesel as it works out to be cheap. With charging three to four units, an EV may run up to 100 kms. For covering the same distance, fossil-fuel based vehicle may require four to five litres. The EV boom is expected in the coming days as the Government of India is promoting Electric Vehicles in a big scale,” he noted.

Explaining the salient features of the EV Charging Station at Vijayanagar, Basavaraj, Junior Engineer, CESC, said it would be open 24×7. Tariff would be different for AC (slow charging) and DC (fast charging) points. Rate would be decided after three months of free charging as per guidelines of KERC. There are various mode of payment for recharging vehicle, for which one has to down the app.

Final round of talks are going on with the company concerned for setting up of two more stations in Kuvempunagar and at KEB Office, Kesare in Rajendranagar. Once finalised, the stations would be ready within two months. Once EV owners download the app, they can get their vehicles recharged on their own without anybody’s help, he noted.

N. Raghavan, proprietor of Raghulal & Co., told SOM that EV  Charging Station was much needed as charging with DC point would save a lot of time. “I have a battery operated car which needs charging for 12-13 hours with normal (AC) charging point. Having a DC point is little bit expensive. With the public EV  Charging Station established by CESC, I will prefer going there to get my car fully charged in less than one hour. With 6-7 units charged, I can travel up to 370 kms.” he said.