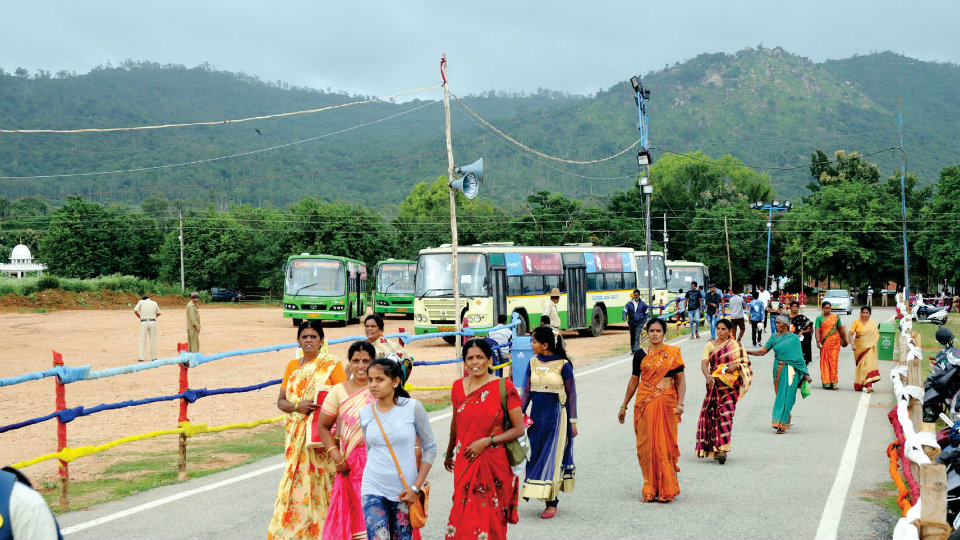 Traffic restricted; Free bus facility from Lalitha Mahal Helipad from 2 am to 8.30 pm; Passes for vehicles; Battery-operated vehicles for Specially-abled

Mysuru: With hundreds of thousands of devotees expected to visit Chamundi Hill on Ashada Fridays — July 5, 12, 19 and 26 and also for Chamundeshwari Janmothsava on July 24, the City Police have issued guidelines and advisory for the public.

The Police in mufti will keep a close watch on criminals, as there are possibilities of chain-snatchers, pick-pocketers and other offenders arriving at the Hill to carry-out crimes.

An exclusive Helpline, lighting arrangements and CCTV cameras have been installed at Chamundi Temple atop the Hill. Security arrangements, toilets, medical facilities, lighting and drinking water facility have been provided at the makeshift bus stand near Lalitha Mahal Helipad.

As in the past, the devotees are required to park their vehicles at the parking facility near Lalitha Mahal Helipad and board buses deployed by KSRTC for ferrying devotees to the Hill free of cost. The bus service starts as early at 2 am on all Ashada Fridays. KSRTC bus services to the Hill will come to an end at 8.30 pm (return trip at 10 pm) on all the four Ashada Fridays.

Vehicles carrying Prasada to the Hill must have passes issued by the District Administration. Prasada must be distributed only at the specified time and Prasada vehicles arriving early or coming late will not be allowed. Also, the distribution of Prasada to the devotees will be allowed only after a check by the health authorities.

Any Departmental vehicle (inclusive of Police Department) who want to travel to the Hill on official duty, have to get vehicle passes in advance from the Office of the City Police Commissioner.

Government vehicles and Police vehicles arriving for bandobust  duties are mandated to park at the parking slot near Devikere.

VVIP, VIP vehicles travelling to the Hilltop must obtain passes from the Office of the City Police Commissioner. Such vehicles have to be parked at slots 2 and 3. Also, movement of all types of vehicles has been banned on the stretch from Mahishasura Statue to Chamundeshwari temple.

Media vehicles going to the Hill for coverage are required to get passes in advance from the Office of the City Police Commissioner, by applying through the Information Department.

No vehicle will be allowed to travel to the Hill after 10 pm on every Thursday, preceding the Ashada Fridays.

However, residents atop the Hill have to get passes after submitting required documents at the Chamundi Hill Gram Panchayat Office.

Specially-abled and aged persons visiting the Hill will be ferried in battery-operated vehicles from Mahishasura Statue to the temple.

Devotees who wish to climb the steps to the Hill, must park their vehicles at the ground in front of the Pinjarapole.