Home » News » City to get Rs. 150 crore under Central Scheme 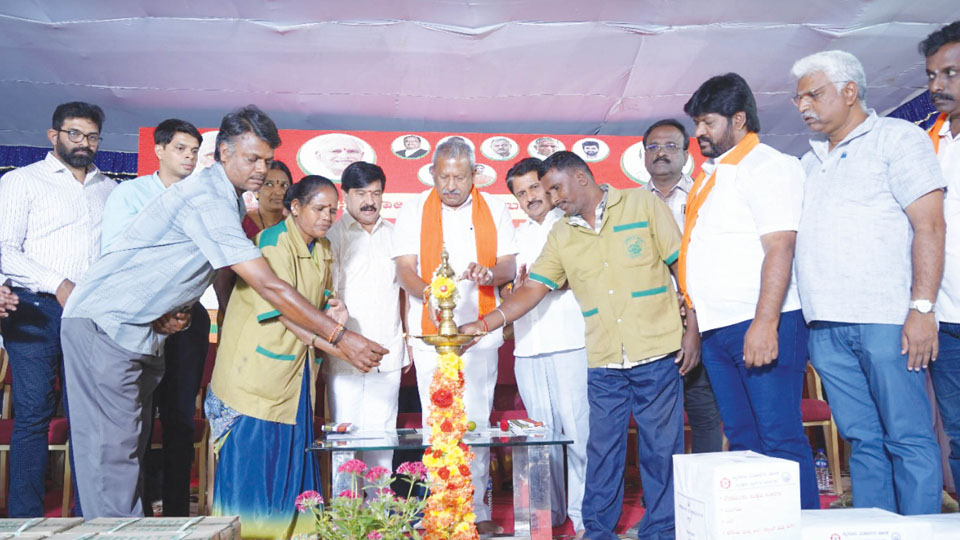 City to get Rs. 150 crore under Central Scheme

Stating that more than 69,000 LED bulbs have been installed in the city, Basavaraj asserted that he had taken necessary steps to ensure that the Ring Road is properly lit with street-lights.

Stressing on the need for keeping the city clean and hygienic ahead of the President’s visit to the city for Dasara inauguration, the Minister said that the State has been receiving copious rainfall due to the blessings of Goddess Chamundeshwari.

Opining that Modi is a tall leader who has made his own mark globally, Basavaraj said that it is happy to note that KR MLA S.A. Ramdas is working in the footsteps of the Prime Minister. Terming the MLA as a model legislator, he said that the development works in KR Constituency is there for everyone to see.

MLA S.A. Ramdas in his address, said that one thousand houses will be identified under ‘Kitchen garden’ concept for enhancement of family income. The Horticulture Department will distribute saplings for the initiative, he added.

“Street vendors registration drive has begun and those registered will be issued identity cards. Those who do not have identity cards, will not be permitted to carry out business. These identity cards is also helpful for the street vendors to avail other Governmental benefits,” he said adding that he is determined to reach out welfare schemes to the doorsteps of targeted beneficiaries.

Ramdas further said that a canine treatment and rehabilitation centre will be set up by the MCC in a 3-acre area at a cost of Rs. 2 crore. This apart, a 4-acre area has been identified along Chamundi Hill road for rehabilitation of monkeys, he said adding that Rs.2 crore has been earmarked for this centre.

The MUDA has launched 28 different works at a total cost of Rs. 61.55 crore in KR Constituency, he added.