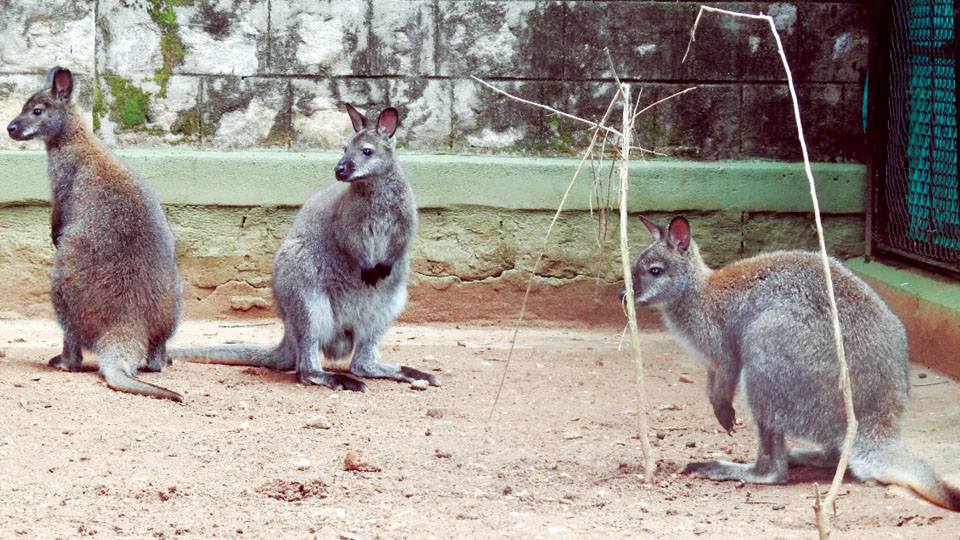 3 Wallabies, 15 Baboons and 5 Ring-Tailed Lemurs will be put on public display soon

Mysore/Mysuru: Fresh guests have arrived at the Sri Chamarajendra Zoological Gardens in Mysuru (Mysuru Zoo) from foreign shores. Though these animals were sanctioned by various international zoos long back as per the International Animal Exchange Programme, these animals have arrived only now as their shipping was delayed due to COVID-19.

All the animals have been quarantined now and will be up for public display once the cages and areas are readied. The animals that have been imported from Singapore and the Czech Republic are Wallabies, Ring-Tailed Lemurs and Baboons.

Zoo Authority of Karnataka (ZAK) Chairman L.R. Mahadevaswamy told SOM that Hyenas from Mysuru Zoo will be sent to Singapore Zoo which has given 15 Baboons (8 females and 7 males). Three Hyenas will be despatched to Singapore, he said.

Three Wallabies (1 male and 2 females) have come from the Czech Republic and sometime back, five Ring-Tailed Lemurs were brought from the same zoo, he added. “The animals have been quarantined as per the precautions and they will be put on display after 21 days,” Mahadevaswamy said.

Wallabies are mammals that are classified into the infraclass Marsupialia. They belong to the order Diprotodontia, which includes kangaroos, opossums, wombats and koalas. They are members of the Macropodidae family along with kangaroos. Wallaby means “big feet.”

These mammals have small forelimbs that are primarily used for feeding. They possess large ears and a long, pointed snout. Their elongated faces provide ample jaw room for a series of large, flat teeth that are specialised for chewing up plant materials. These animals also have large, strong tails. Their powerful hind legs allow them to bound along at high speeds and to jump across vast distances.

Baboons are primates comprising the genus Papio, one of the 23 genera of Old-World monkeys. There are six species of baboons and each species is native to one of six areas of Africa and the Arabian Peninsula.

Baboons are some of the world’s largest monkeys and males of different species average from 33 to 82 pounds. Baboon bodies are 20 to 40 inches long, not including substantial tails of varying lengths. Baboons generally prefer savanna and other semi-arid habitats, though a few live in tropical forests. They eat fruits, grasses, seeds, bark, and roots, but also have a taste for meat.

Lemurs are primates found only on the African island of Madagascar and some tiny neighbouring islands. Because of its geographic isolation, Madagascar is home to many amazing animals found nowhere else on Earth. Ring-Tailed Lemurs are unmistakable because of their long, vividly striped, black-and-white tail.

Lemurs are the world’s most endangered group of mammals; they are even the world’s most endangered group of vertebrates. Lemurs use their hands and feet to move nimbly through the trees. They forage for fruit, which makes up the greater part of their diet, but also eat leaves, flowers, tree bark and sap. The Ring-Tailed Lemur is a medium-sized primate that is about the size of a house cat. Adult male and female ring-tailed lemurs weigh from 3-3.5 kg.