Home » News » ‘People can clear doubts on RSS through self-assessment’ 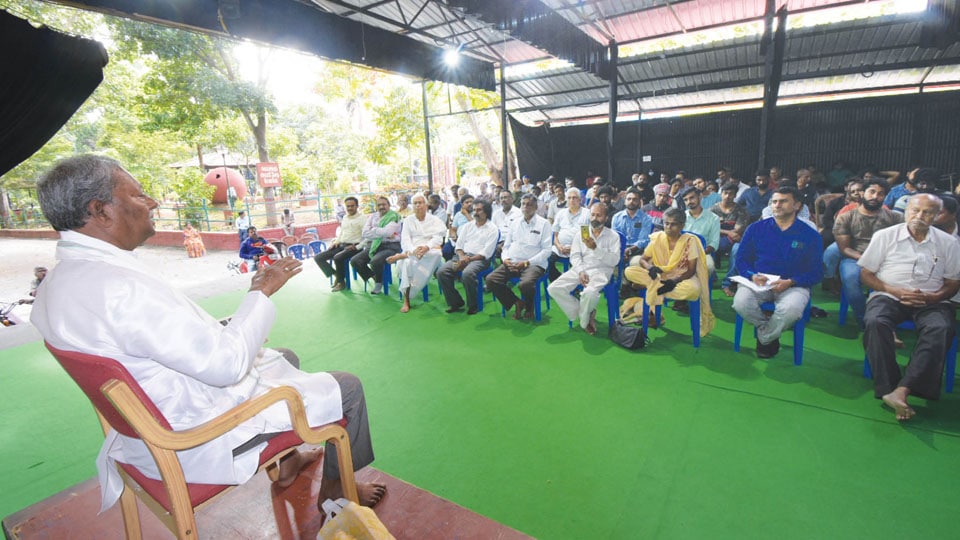 ‘People can clear doubts on RSS through self-assessment’

Mysore/Mysuru: Maintaining that the RSS (Rashtriya Swayamsevak Sangh) is carrying out a silent revolution for social transformation, senior RSS leader of the city M. Venkatram said that the people can make a self-assessment of the RSS in order to clear any doubts that they may have on the organisation. He was speaking on the topic ‘Why am I in RSS?’ during the Chintana-Manthana interaction programme organised by Rangayana as part of its over week-long (June 12 to 20) ‘Greeshma Rangayanotsava’ theatre festival at B.V. Karanth Ranga Chavadi in Rangayana premises here yesterday.

Pointing out that many people from Ashokapuram area in the city had worked for the construction of the new Palace building after the old Palace was gutted in a fire long ago, Venkatram said that considering their efforts in building the new Palace, the then Mysore Maharajas formed the current Ashokapuram residential area and gave them lands at Veelyada Yele Thota for taking up farming as a livelihood.

“The people of Ashokapuram promoted plays, wrestling, music, dance and such other forms of art. I and the current Chamarajanagar MP V. Sreenivasa Prasad grew up together since our childhood days. We used to play at neighbouring Krishnamurthypuram which had a dominant Brahmin population. The boys who used to play at the then Ganesha Park included us too in their sporting activities and no one asked to what caste we belonged to. RSS Shikshak by name Satya used to teach us devotional songs and tell us stories daily. Satya was so strict in conducting activities  that he used to visit our homes if we absented even for a day. He used to treat everyone as one and the same,” Venkatram recalled while explaining how he came in contact and grew up with the RSS.

Replying to a question by the audience, Venkatram said that all those who love India are Indians. Pointing out though there may be intellectual and ideological differences amongst us, we should have love and affection for the country, he said that RSS is working on the agenda that everyone of us are one and the same.

Dismissing the allegations that RSS is against progressive organisations, Minority community and Socialism, as baseless, he reminded that former Union Minister late Jaffer Shariff too was in RSS for several years. But he disassociated himself from the organisation later, unable to face unfair criticisms by some sections, he said.

Rangayana Director Addanda C. Cariappa, in his address, said that the interaction on ‘Why am I in RSS’ was organised in order to clear the air on the general allegations that RSS is a Brahminical organisation and that it was anti-progressive in nature.

Senior RSS leader M. Venkatram was invited to clear all doubts and confusions regarding the functioning and activities of RSS, he added.

On the occasion, former MLC D. Madegowda, who is popularly known as ‘Mane’ Madegowda for having distributed over 50,000  houses for the shelterless under ‘Ashamandira’ scheme, when he served as the then Mysuru CITB Chairman, was felicitated  by Rangayana and several organisations in consideration of  his service to the society.