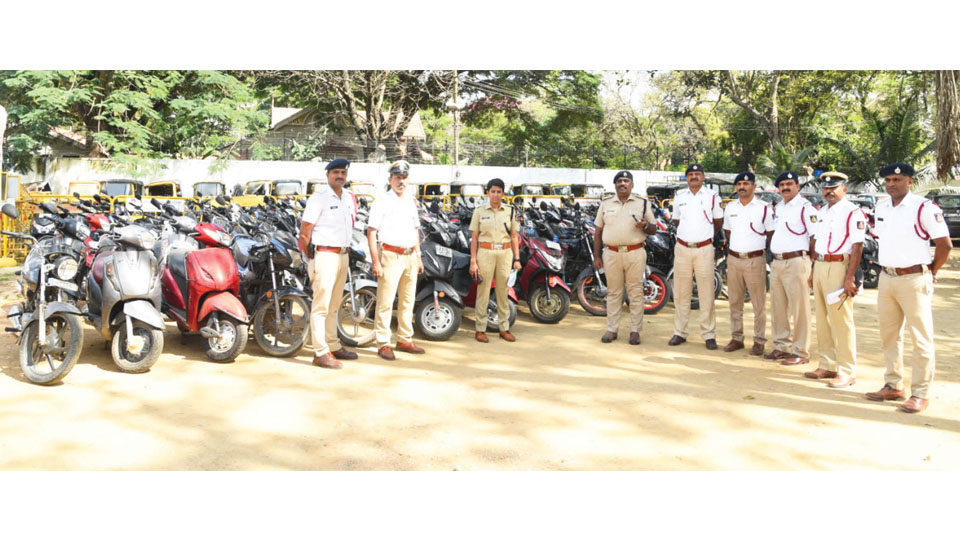 Mysore/Mysuru: The Civil, Traffic and CAR Police, who continued their joint operation to effectively implement traffic rules and to put brakes on crimes, have collected a total fine of Rs. 1,39,600 from the offenders yesterday.

The drives were held across the city from 6 pm to 9 pm during which 997 vehicles were checked, 274 cases registered and 11 vehicles were seized.

On Friday, 1,991 vehicles were inspected, 19 vehicles seized and Rs. 2.27 lakh fine collected from the offenders.

The Mysuru City Traffic Police, who are conducting special operations against triple riders since a couple of days, continued the drive yesterday too.

During the drives being conducted from Nov. 20, the Traffic Police have also created awareness on the ill-effects of triple riding which may result in accidents leading to loss of limbs and lives.

The first phase of the operation was held from Nov. 20 to 26 during which 145 cases were booked against triple riders, fines were collected and many two-wheelers were seized.

The second phase was held from Nov. 27 to Dec. 3, during which 121 cases were registered against the offenders.

City Police Commissioner B. Ramesh has urged motorists especially two-wheeler riders to follow traffic rules compulsorily and has asked motorists to always keep their vehicle documents and Driving License (DL) with them and produce them when asked during checking.

Most violators are college students

DCP (Crime and Traffic) M.S. Geetha Prasanna said that during the drives against triple riders, most of the violators caught were college students. Many of them do not have DLs and the parents should be aware of the dangers of triple riding first, she added.

She said that during the drive, those caught for violations just pay the fines but they do not understand the dangers involved in triple riding. If the same trend continues, more stringent action would be initiated against traffic rules violators, she added.

Traffic violation drives in front of colleges from today

Drive against triple riders and other traffic rules violators would be conducted in front of PU Colleges and its surroundings from today. Awareness about traffic rules will be created among the students and fines would be collected for traffic violations. —Geetha Prasanna, DCP (Crime and Traffic)

2 COMMENTS ON THIS POST To “Civil, Traffic and CAR Police continue joint operation against traffic offences”