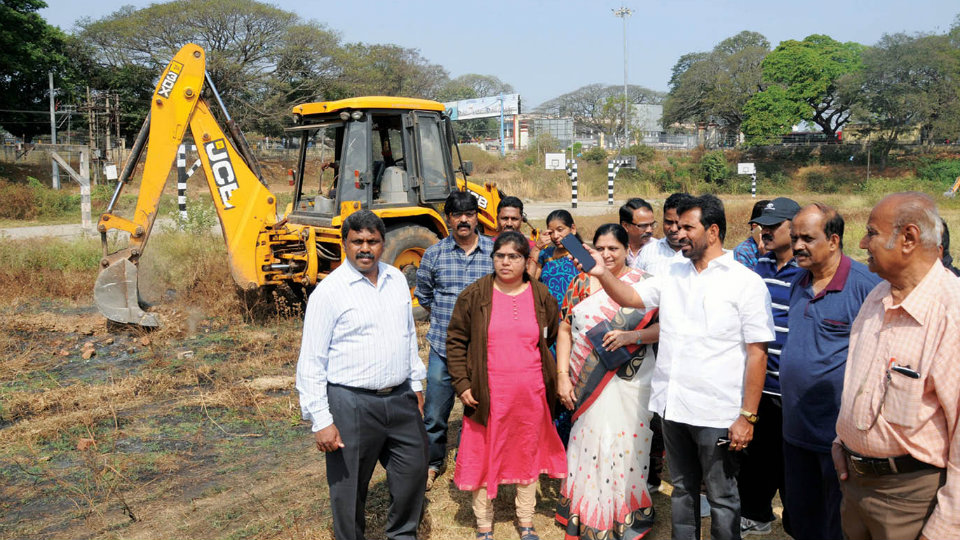 Mysuru: Nearly 25 students of Mysore Medical College and Research Institute (MMC&RI) and staff of Mysuru City Corporation were involved in cleaning the J.K. Grounds yesterday, which was full of debris and weeds.

This cleaning operation was taken up to keep the area clean even after the completion of the Swachh Survekshan 2019 that was over on Jan.31.

Meanwhile, Mayor Pushpalatha Jagannath and Corporation Commissioner K.H. Jagadeesha have thanked the people of the city for participating in large numbers during the Swachh Survekshan 2019 and making it a huge success.

In a statement, they said that a survey had been conducted between Jan.4 and Jan. 31 and all efforts had been made to reach out to the citizens regarding keeping the city clean scientifically.

There were also instructions given at every stage as to how to segregate the wet and dry waste, using of Swachhata App and its uses. Also, the view of everyone was taken regarding keeping the city clean.

Brand Ambassadors, public, NGOs, students and people’s representatives participated enthusiastically in this endeavour. They also hoped that in the future the citizens would cooperate to maintain the high standards set to keep Mysuru as a top clean city in the country, they said in the statement.

They swept the road, collected the garbage in large bags and disposed it scientifically.

The cleaning, which commenced at about 9.30 am concluded at 11.am.

Meanwhile, Ansari, a shopkeeper, speaking to SOM said that they took up the cleaning in a bid to put Mysuru in the No. 1 spot as the cleanest city in India besides adding that they would put up boards in shops requesting customers to shun plastic and use paper or cloth bags which are environment-friendly.

Stating that keeping the city clean is not the work of the civic body alone but the responsibility of all, Ansari said that such cleaning activities would be taken up regularly in future.