Home » News » Devotees from across Karnataka witness a grand Rathotsava 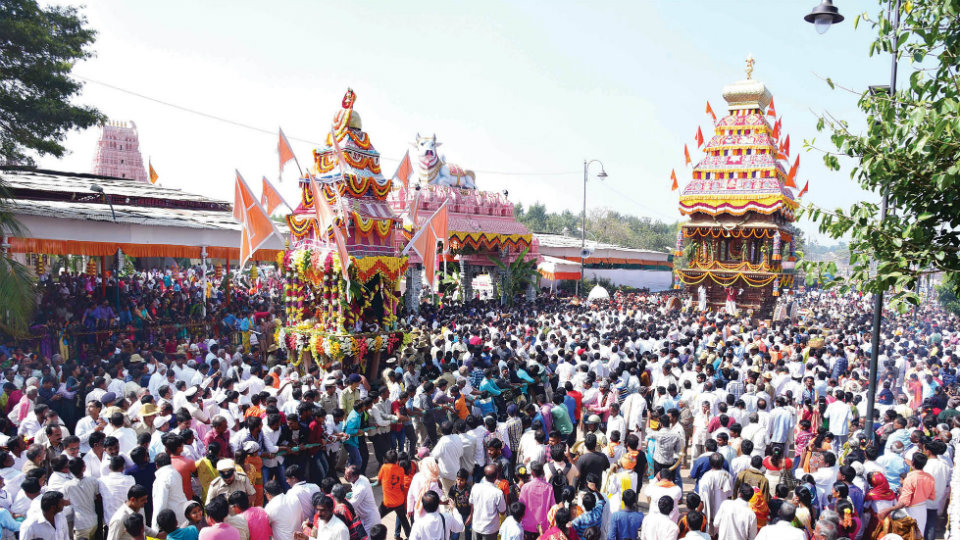 Devotees from across Karnataka witness a grand Rathotsava

They celebrated the car festival (rathotsava) in religious fervour and grandeur, by pulling the old and new chariots which were accompanied by folk and cultural troupes. Suttur Seer Sri Shivarathri Deshikendra Swamiji and various pontiffs graced the occasion.

A large number of devotees from across the State including from Mandya, Mysuru, Chamarajanagar districts flocked the Suttur village, the venue of the Jathra Mahotsava to take part in the rathotsava which had a history of thousands of years.

Earlier, rituals like Rudrabhishekha at Karthara Gadduge began as early as 4 am and devotees gathered there at the crack of the dawn after taking a holy dip at Kapila River.

They offered pujas to the old small chariot and the 55-feet tall new chariot of the temple, weighing over 45 tonnes, built at a cost of Rs. 2 crore last year. Both the chariots were decorated with special flowers and the chariots carried the utsavamurthies of Shivayogi Swamiji.

Seers from various mutts and religious centres offered floral tribute to the utsavamurthy idols and pulled the ropes of the chariots heralding the commencement of the festival.

Devotees pulled the chariots by chanting Hara Hara Mahadev and other slogans at 10. 55 am and they offered flowers and javana to the new chariot. The chariot returned to its starting point at 12 noon after completing a procession of about 2 km.  The car festival procession route was decorated with mango leaves, flowers and buntings.

Folk troupes and folk dances including Maragalu Kunitha, Puja Kunitha, Dollu Kunitha, Hulivesha, Garudigombe and others were the major attraction at the procession.    The participation of other States’ folk troupes added glitter to the festival.