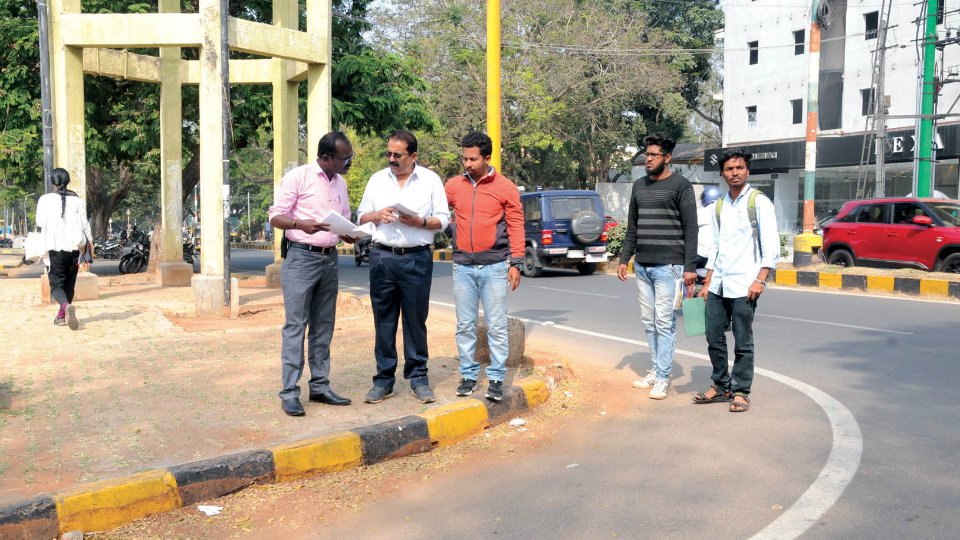 Mysuru: Awakened by the surfacing of an alleged double billing scam where Rs.1.4 crore was reportedly siphoned off by submitting two bills for the same work, senior officials of Mysuru City Corporation (MCC)  have begun a close inspection of Mahatma Gandhi (MG) Road right from Friday.

A team led by MCC Executive Engineer Ramakrishna commenced the inspection of MG Road (Vani Vilasa Road) on Friday from District Court Complex to Siddappa Square focussing on the asphalting work covering the length and width of asphalted portion, quantity of materials used, equipment used for the job and the quality of the asphalt used.

Also examined were the Median Parameters and the concrete blocks used for the purpose. Every information was meticulously and methodically documented leaving no stone unturned.

The thorough inspection continued yesterday from Siddappa Square to MRC Circle. Ramakrishna scrutinised the bills submitted for every work undertaken.

The scam issue was raised by leader of the Opposition in MCC B.V. Manjunath on Jan.30 during the Council Meeting. He had alleged that after paying the assigned contractor for the work on MG Road, a second bill was created to siphon off Rs. 1.4 crore for the same work and paid also. He had further alleged that MCC Zone 1 Assistant Commissioner Sunil Babu and Junior Engineer Mohan Kumari were directly involved in the deal.

A decision was taken in the MCC Council Meeting to constitute a Probe Committee to go into the details of the alleged scam headed by the Mayor. It was also decided to include the PWD Superintending Engineer as the Member-Secretary and Deputy Mayor, Works Committee Chairman, leader of the ruling party and others as members of the Probe Committee, Mayor Pushpalatha Jagannath submitted a proposal of forming the Probe Committee to the MCC Commissioner which has not been approved yet, according to sources.

The delay in Constituting the Probe Committee has fuelled speculations in the corridor of MCC with rumours afloat that plans are getting ready to bury the scam. Such a magnitude of scam is not possible by just two officials without the assistance of Senior Officers of engineering and accounts sections, feel the sources.