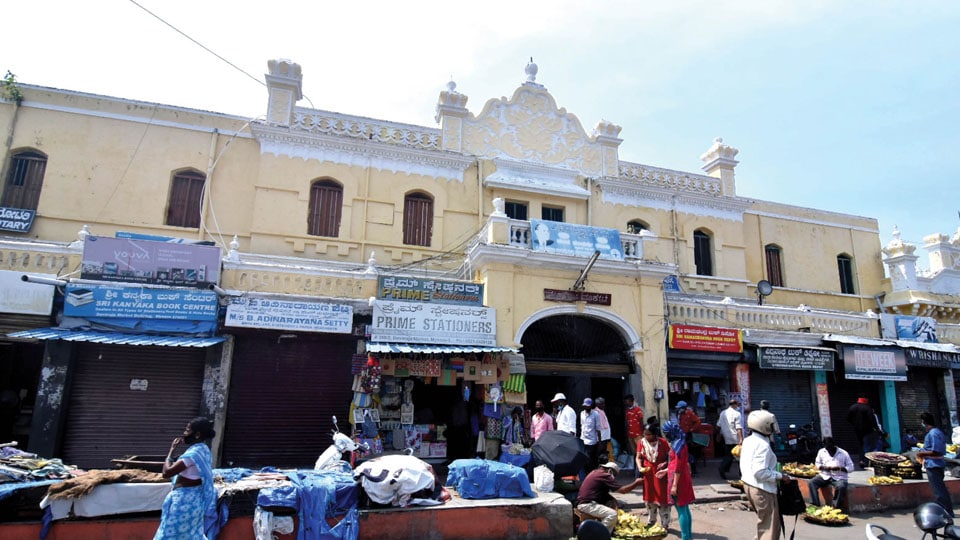 Mysore/Mysuru: For the second time, Chamaraja MLA L. Nagendra has appealed the Mysuru District Minister S.T. Somashekar to clear the confusion and contradictory reports on matters related to the fate of Lansdowne and Devaraja Market Buildings — the nearly 120-year-old heritage structures in the heart of the city.

The MLA had made the first appeal when Somashekar took over as the District Minister from his predecessor V. Somanna earlier this year. Despite two appeals, no decision has been taken on the two heritage structures – either to restore, demolish or rebuild. There are many pro and anti-demolition lobbies who so far have only released statements to the media but on the ground zero, nothing has been done.

“Both of them are in a dilapidated condition and some portions of these structures have already collapsed. There is a lot of confusion regarding the future of these two heritage structures. It is high time that the Government takes a firm decision on this matter,” Nagendra said in his latest appeal to the Minister.

At the same time, the MLA urged the Minister to get funds from the Government to demolish the dilapidated Devaraja Market and the Lansdowne Building and rebuild them in a traditional way keeping in mind all the heritage aesthetics.

“There were 54 shops in Lansdowne Building and a portion of the structure collapsed and lives have been lost. The building now stands desolate and it is like a black mark on the city’s heritage character. It is unfit for repairs and all the vendors have been moved to make-shift structures lined up by the side of the building,” he said.

READ ALSO  Planting of 1 lakh saplings at Chamundi Hill to begin in a week: Forest Minister

On Devaraja Market, the MLA said even this structure is dilapidated and a portion had collapsed. “The issue is long-pending one and has been in the news for years. When Siddharamaiah and H.D. Kumaraswamy were running the Government, they had personally taken interest and visited the Devaraja Market and the Lansdowne Buildings. But nothing moved,” he said.

Drawing the Minister’s attention on the pro-and anti-demolition of both the structures, Nagendra said that the issue has been dragging on for too long despite many attempts. “There has to be some conclusion as some of the vendors of Devaraja Market are opposing demolition while some are for it. I urge you to visit the structures and take a suitable decision without any more delay,” the MLA urged.

Nagendra also appealed to the Minister to undertake restoration and repair works of K.R. Hospital building which is also in dilapidated condition as thousands of patients visit the hospital every day.

On the drinking water project in Mysuru, the MLA informed the Minister that Jamshedpur Utilities and Services Company (JUSCO), a wholly-owned subsidiary of Tata Steel, had bagged a six-year performance-based water management contract for Mysuru. But JUSCO abandoned the project midway causing losses to Mysuru City Corporation and also at the same time stalling the project due to abandonment. A thorough inquiry must be initiated on JUSCO’s lapses, Nagendra told the Minister.