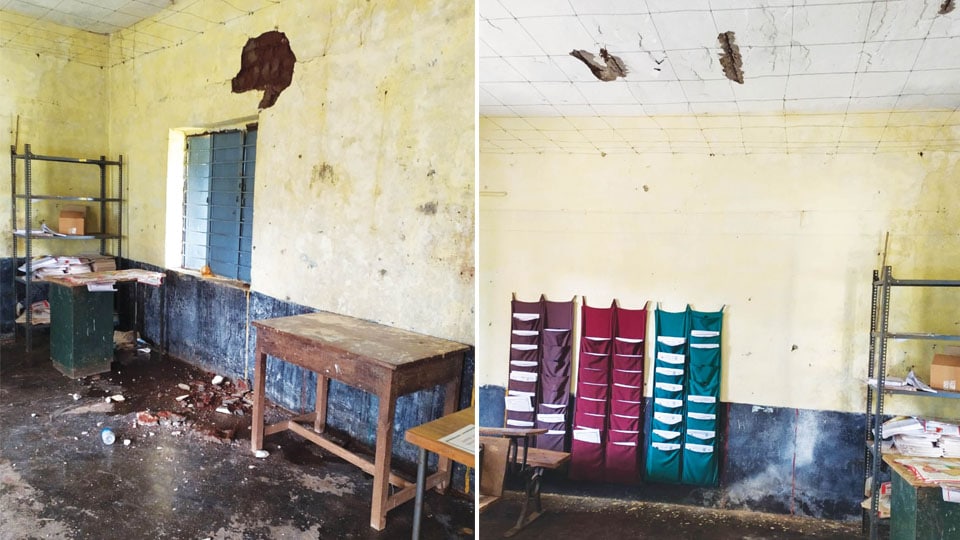 Mysore/Mysuru: Mouldy walls, plaster falling off ceilings, lack of furniture and poor lighting — these are a few of the many problems one can find in the building of the Government School at H.D. Kote. Yesterday, students had a providential escape when portions of the school ceiling collapsed when they were attending classes.

The school is located at M. Kannenahalli in Hampapura hobli under Kyathanahalli cluster. Due to heavy and continuous rain, water has seeped into the ceiling resulting in cement chips falling off. This also reflects the poor quality of works undertaken when the building was constructed and repaired later.

Luckily, the children escaped unharmed but the incident angered the parents of the students.

Fortunately, the teachers realised that the concrete will give away and led the children from first to third standard, to the office room that is somewhat better than the classroom. The classroom was converted into a ‘nali kali’ room where teachers adopt new techniques to teach children the basics.

The school building was constructed 20 years ago and has four classrooms, one office room and one kitchen. There are over 57 children studying in the school from first to seventh standard. After the construction, the building reached a dilapidated state within years and in 2014, repair works were carried out with an estimated cost of Rs. 2 lakh.

Forced to squat on the floor

While the building looks dry and strong in summer, it is quite the opposite when it rains where water seeps through the ceiling. Students of 4th to 7th standard can sit on benches but students of 1st to 3rd standard have to squat on floor that is usually freezing due to moisture from the ground.

Seeing the plight of the children struggling with a cold floor, teachers have pooled-in money to get floor mats. Though this has provided some respite, within no time even the floor mat gets cold as the moisture is high. Despite the pathetic condition of the school, the Education Department is not bothered and no senior officer has visited the school so far to draw the attention of the Government towards it.

Many parents who visited the campus have found that it was unsafe for their children. “There were gaping holes in the ceiling and portions of windows. Pieces of concrete and mud were falling off. How can our kids study here,” asked Nagaraj, a parent.

The authorities in 2014 plastered the ceiling of the classroom with cement, as there were some cracks. Due to continuous rains, there have been cracks again leading to the incident. After minor repairs, no other works were undertaken, he added.

“We have been telling the teachers to take note of the plaster of the ceiling peeling off. Our children had a close shave from what could have been a catastrophic incident. Since we could not afford education in a private school, we are left with no other option but to send our kids to this nearby Govt. School. Let alone the basic facilities, there is no safety for life of students in this school as the infrastructure is poor,” another parent said.

According to Mallesh, a member of Chikkareyuru Gram Panchayat, the villagers and Panchayat members have been telling the Block Education Officer (BEO) about the dilapidated building since the last three years. “But the BEO has not bothered to take any action citing lack of funds. We appeal to the H.D. Kote MLA to sanction money to demolish the existing building and construct a new one,” he added.