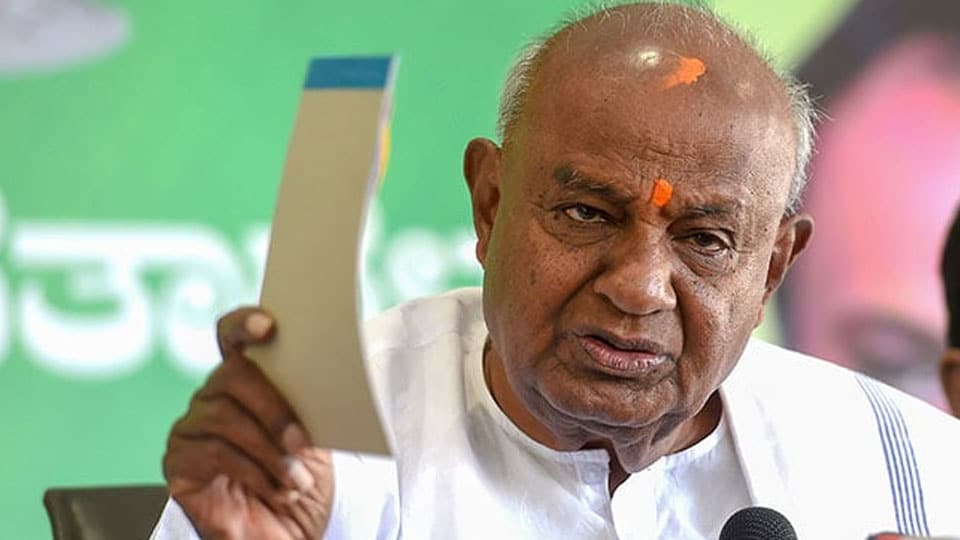 Mysuru: Dismissing widespread speculations that Congress and JD(S) have reached a tacit understanding to ensure the defeat of disqualified legislators who are contesting the Dec.5 bypolls on BJP tickets, JD(S) Supremo and former Prime Minister H.D. Deve Gowda (HDD) maintained that the Congress and JD(S) cannot go together.

Speaking to presspersons at Government Guest House in Nazarbad here this morning, Deve Gowda said that although the objective of both parties were the same, the two cannot go together.

Accusing the BJP of spending huge money for winning elections, he alleged that as the BJP is the ruling party nobody was willing to take action against the party for poll code violations and electoral malpractices.

Stating that former Congress CM Siddharamaiah is carrying out a brisk campaign in all the 15 Assembly segments, the former PM said that he and his son H.D. Kumaraswamy too have been campaigning within their limits and they were unable to catch up with Siddharamaiah when it came to campaigning.

He lashed out at Hunsur BJP candidate A.H. Vishwanath for saying that HDD remains in his heart forever. Deve Gowda said that Vishwanath’s statement was merely a political stunt aimed at winning back sympathy of voters.

Claiming that the people were are wise enough to understand tantrums of Vishwanath, he ridiculed the claims of Chief Minister B.S. Yediyurappa that the BJP would win all the 15 seats. When asked about the post-poll political scenario, he said a lot depended on results.

Referring to Maharashtra politics, he opined that the political scenario in the country would change completely if the Shiv Sena-NCP-Congress coalition successfully completes the five-year term.

Reiterating that the success of the coalition Government in Maharashtra holds the key for the unity of opposition parties, he stressed on the need to end single party rule for long and for the election of a federal Government, involving regional parties and local outfits. MLA S.R. Mahesh, MLC S.L. Bhojegowda, former mayor R. Lingappa and others were present.

The JD(S) Supremo, who arrived in the city last night by road from Bengaluru, stayed overnight at the Government Guest House and left for Bilikere.