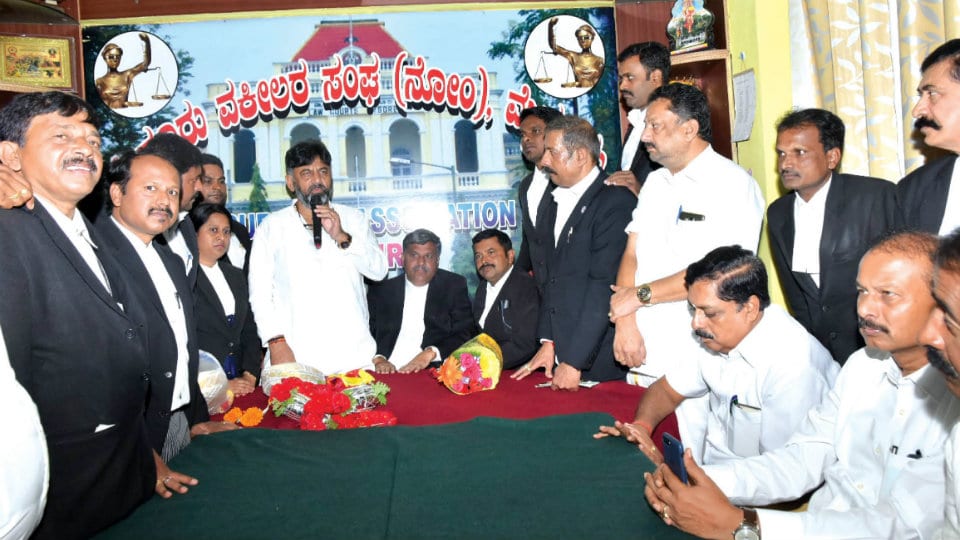 Mysuru: Over a month after he was released from a Delhi jail following his arrest by the Enforcement Directorate (ED) in connection with a money-laundering case, Kanakapura Congress MLA and former Minister D.K. Shivakumar visited the Mysuru Bar Association Office in the City Courts Complex this morning to express gratitude to the Association for extending moral support to him during his trial.

Claiming that he is keenly observing the statements being made by leaders from all political parties in the run-up to the by-polls, he said that he would not like to comment on them now and right now he was only praying for the well-being of the State.

Regretting that of late politicians are getting little respect, Shivakumar underlined the need for a selfless debate on issues concerning the State.

The Delhi High Court on Tuesday adjourned the hearing on the pleas filed by mother and wife of D.K. Shivakumar (DKS) in connection with a money laundering case, to Dec.4.

As soon as the hearing came up, the Enforcement Directorate sought more time for putting forward arguments, following which the court adjourned the hearing till Dec.4.