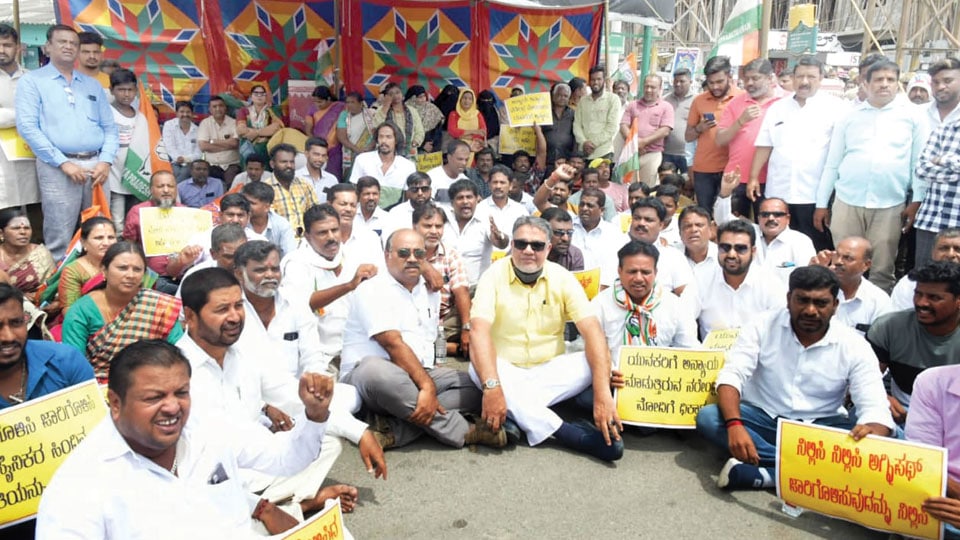 Mysore/Mysuru: Even as the ongoing nationwide protests against the Centre’s Agnipath military recruitment scheme continue in different States like Rajasthan, Bihar, Madhya Pradesh and Uttar Pradesh, Congress MLAs and leaders staged protests at various locations of the city  his morning.

The protesters claimed that the scheme was ruining the dreams of several youths who aspired to join the Indian Defence. The announcement of the Agnipath scheme has sprouted a fear of unemployment among youths, they alleged and felt that it would destroy the lives of youth who will be hired through deceptive means.

The Government had promised to hire over 10 lakh people but has failed to do so. Hiring the soldiers for a four-year period and later at the end of which only 25 percent of the recruits will be retained for regular service is injustice, thus will increase unemployment in the country, they alleged.

A six-month training is not a proper way to build a powerful army and the trainees will not be well-trained to handle machine guns and other war equipment in a short period of time, they said.

The Centre has taken the wrong decision to cut down Government’s massive salary and pension bills and free up funds for arms procurement, they said. For the future of the country and youths, the Government should drop this idea and must continue the full-scale recruitment procedure, the protesters opined.