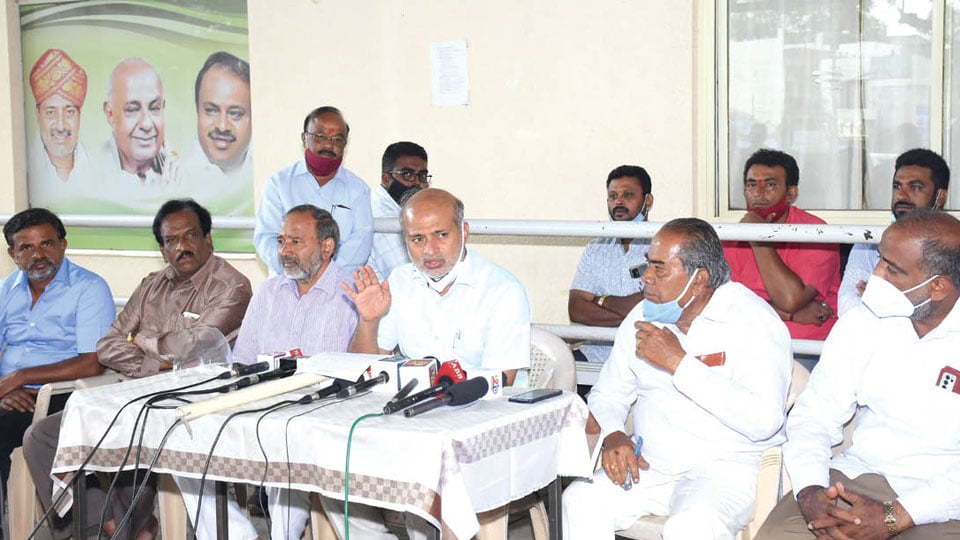 Mysore/Mysuru: Three days after Sunanda Palanetra was elected as the first BJP Mayor of the city, JD(S) MLA S.R. Mahesh blamed the adamant stance of Congress leaders for the Mayor post  going to BJP.

Addressing a press meet at his office near Ramavilas Road here on Saturday, S.R. Mahesh, the JD(S) MLA from K.R. Nagar, maintained that the Mayor post went to the BJP as the State Congress leaders took an adamant stand of not talking to State JD(S) leaders in the run up to the Mayoral poll held on Aug. 25.

Stating that only N.R. MLA Tanveer Sait approached him the previous night of the day of Mayoral poll, Mahesh said that he clearly told Sait that State Congress leaders should talk to JD(S) top brass, which did not happen at all and this forced the JD(S) to field it’s own candidate for the Mayoral poll.

Referring to the recent announcement by his fellow JD(S) MLA G.T. Devegowda (GTD), who represents Chamundeshwari constituency,  that he would join the Congress, S.R. Mahesh said that he has all along been stating that GTD was always their leader. Expressing the hope that GTD would soon change his mind and continue in the JD(S), he said that the party would wait  for him just like Shabari waited for Lord Rama as told in Ramayana.

READ ALSO  ‘Congress has come to the aid of migrant workers’

Observing that GTD’s exit from the JD(S) would  politically affect him (GTD) and also the JD(S) in the coming days, the K.R. Nagar MLA recalled the efforts made by JD(S) Supremo H.D. Deve Gowda to retain him in the party.

Stating  that GTD  should realise that the party is bigger than an individual, Mahesh contended that both H.D. Deve Gowda and H.D. Kumaraswamy still have an open mind in retaining GTD in the party.