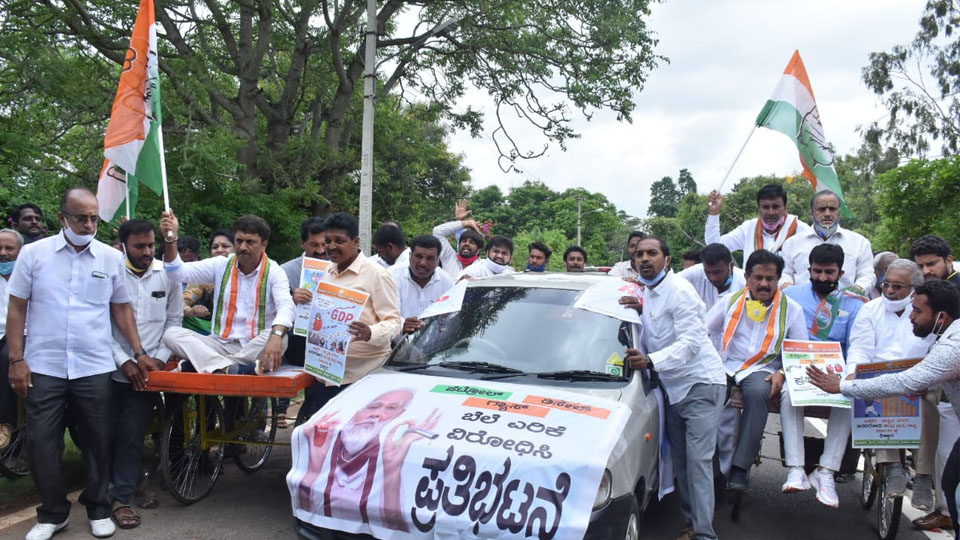 Mysore/Mysuru: As part of the Congress’ Statewide stir against rising fuel prices, the City and District Unit of the party staged a demonstration in the Congress Bhavan premises near the city Railway Station here this morning.

Accusing the Centre of hiking the prices of petrol and diesel every day for the past three weeks, despite falling international crude oil prices, the party workers urged the Centre to immediately roll back the hiked prices in the interests of the common man, who is already reeling under the effects of COVID-19 induced lockdown.

Claiming that the Centre had failed in containing the spread of the deadly virus, with thousands of positive cases being reported from across the country every day, the protestors urged the Government to provide free treatment to all COVID-19 patients as per the Standard Treatment Protocol being followed in several other countries of the world.

Later, the Congress workers took out a rally along with three pushcarts and towing a car from the Congress Bhavan to the DC Office, passing through Dasappa Circle, Field Marshal K.M. Cariappa Circle (Metropole Circle) and Hunsur road and presented a memorandum at the DC Office condemning the fuel price hike.