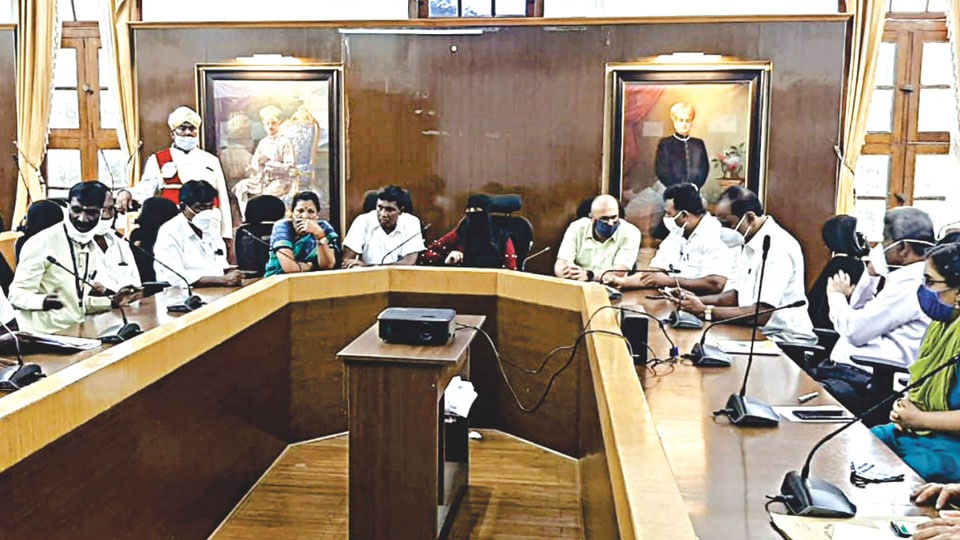 Mysore/Mysuru: The contract UGD (Underground Drainage) workers of the MCC, who had launched an indefinite stir  by striking work on Monday (Dec.14) seeking regularisation of service and payment of daily breakfast allowance, withdrew their stir on Wednesday evening after talks with the Mayor, MCC Commissioner and other officials proved fruitful.

As the stir entered the third day on Wednesday, with Karnataka State Safai Karmachari Commission Chairman M. Shivanna  meeting the protesting  contract UGD workers in front of the MCC Main Office on Sayyaji Rao Road in the morning, Mayor Tasneem chaired a meeting with leaders of Pourakarmika and UGD workers association at the MCC Hall later in the afternoon.

Addressing the meeting, MCC Commissioner Gurudatta Hegde said that the issue of regularisation of service of 231 UGD contract workers will be placed before the MCC’s next Council meeting and a proposal will be sent to the Government in this regard. In respect of the other demand, the Commissioner said that measures will be taken for payment of daily breakfast allowance with effect from Sankranti festival that falls in mid-January.

Following  official assurance on their main demands, the contract UGD workers ended their stir and promised to return to work.