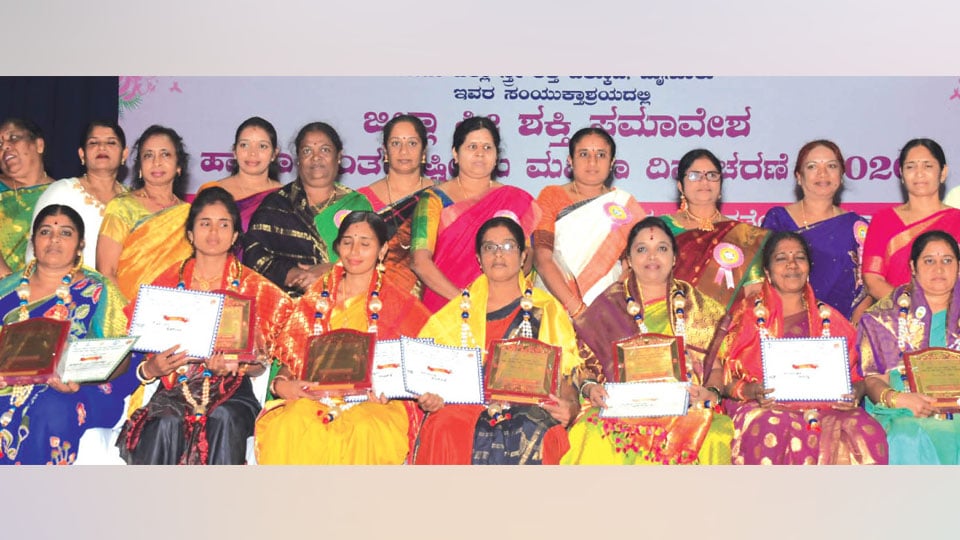 Mysore/Mysuru: The spacious Senate Bhavan in Manasagangothri was jam packed this morning by scores  of anganawadi workers, members of women self-help groups and other womenfolk who thronged the venue for Sthree Shakti Samavesha, a district convention of women, organised by the District Administration in association with Zilla Panchayat (ZP), Women and Child Welfare Department,University of Mysore (UoM) and  Zilla Sthree Shakti Okkoota to mark International Womens’ Day celebration in city this morning.

The event was inaugurated by ZP President Parimala Shyam by lighting the lamp.

Addressing the convention, ZP Vice-President Gowramma Somashekar called upon women not to confine themselves for doing household chores and do something special that benefits the society.

Highlighting the achievements of women in various fields, she said that there are many examples to prove that women can achieve big in almost every sector through sheer hard work, dedication and determination. Regretting that atrocities against women are on the rise despite several laws that give protection to women, Gowramma Somashekar stressed on the need for appropriate measures to end gender discrimination and crimes against women. She further said that men should support and inspire women to achieve excellence in their chosen field.

The event also saw Shakuntala, a staff of the Regional Commissioner’s Office performing a mono acting play on Kittur Rani Chennamma and MSW students of Manasagangothri performing a Mini-play on violence, atrocities and crimes against women. The event also featured an informative Expo on women and Child Nutrition organised by Women and Child Welfare Department.

Walkathon, Cyclothon: A walkathon, organised by the Women’s Cell of St. Philomena’s College and a Cyclothon by Cyclopedia also marked the Women’s Day celebration in city. The walkathon was flagged off by Mysuru Central Prisons Chief Superintendent K.C. Divyashree in front of Kote Anjaneyaswamy Temple at the North Gate of the Palace.

Cyclothon: About 10 women participated in the cyclothon organised by Cyclopedia this morning. The cyclothon was flagged off at the entrance gate to Chamundi Hill and the riders peddled their way to the top and cycled back down. Sowjanya Attavar, Ruth, Nandini, Vatsala and others took part in the cyclothon. They were accompanied by Cyclopedia’s Fariyal and Lokesh.

At Edukare ITES: Women’s Day programme organised by Edukare ITES, was held at The Institution of Engineers on JLB Road with Mayor Tasneem inaugurating the event.