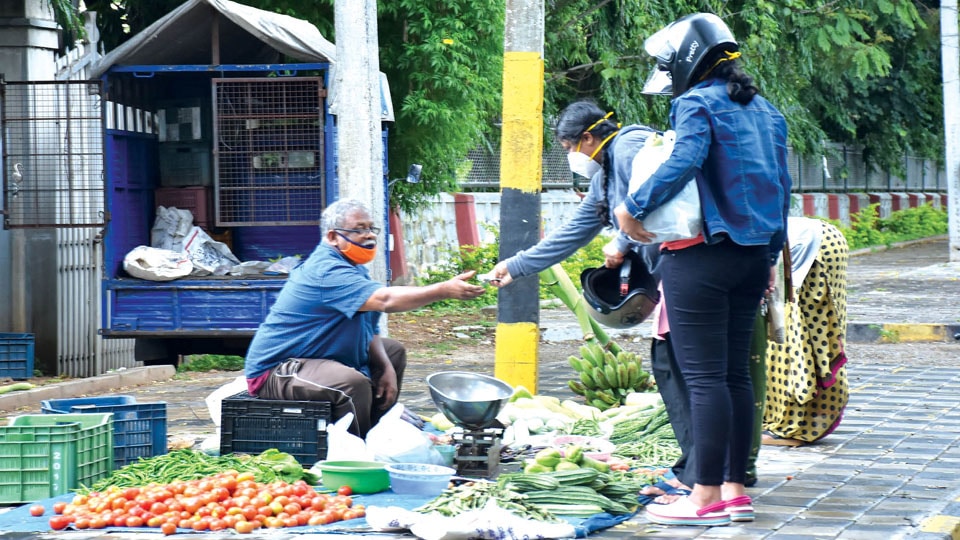 Mysore/Mysuru: Corona has thrown out of gear for thousands of families. The closure of factories, shops and commercial establishments has thrown out of jobs. Now, they are into other professions to eke out their livelihood.

Among them, some have taken to vending fruits, vegetables and other items on footpaths. Their lives have not changed despite unlock 4.0. Persons driving auto-rickshaws, taxi and tongas are now into selling fruits and vegetables on the footpaths on thoroughfares, circles and traffic junctions to earn whatever little they could to pay towards house rent or school fee of their kids.

The number of footpath vendors has gone up considerably across the city indicating prevailing situation post unlock 4.0. While the shops, business establishments and malls are recording a minimum footfall, the number of buyers on footpath has increased.

People get everything on the streets like flowers, fruits, vegetables, ready-made gardens, sandals, plastic items, electronic items and bedspread that too at low price when compared to the shops.

A few have converted their four-wheelers and three-wheeler vehicles into the mobile canteens. They are stationed near the crowded places to cater to the hungry pangs of poor and daily wage workers. But not many people are coming to the mobile canteens following the spike in Corona positive cases in the city.

Understanding the plight of jobless people, the Mysuru City Corporation (MCC) is not disturbing the footpath vendors for a time-being till the economy is improved. But, what they wanted from those vendors is to keep the surroundings clean and strictly adhere to safety guidelines.

Veena was driving autorickshaw for almost 17 years. But now she sells groundnut on Vinoba Road near Metropole Circle. “Corona has changed my life. Passengers are not ready to board autorickshaw. So, I am forced to sell groundnut.”

Babu and his son, Pavan, residents of Sunnadakeri, were running tonga till the February. However, COVID-19 forced them to change their profession to selling prawns and fish on Thyagaraja Road. “We were jobless for almost four months. With no tourist flow into the city, most of the tongawallas are now doing different jobs. We need money to pay house rent and run family”, he added.