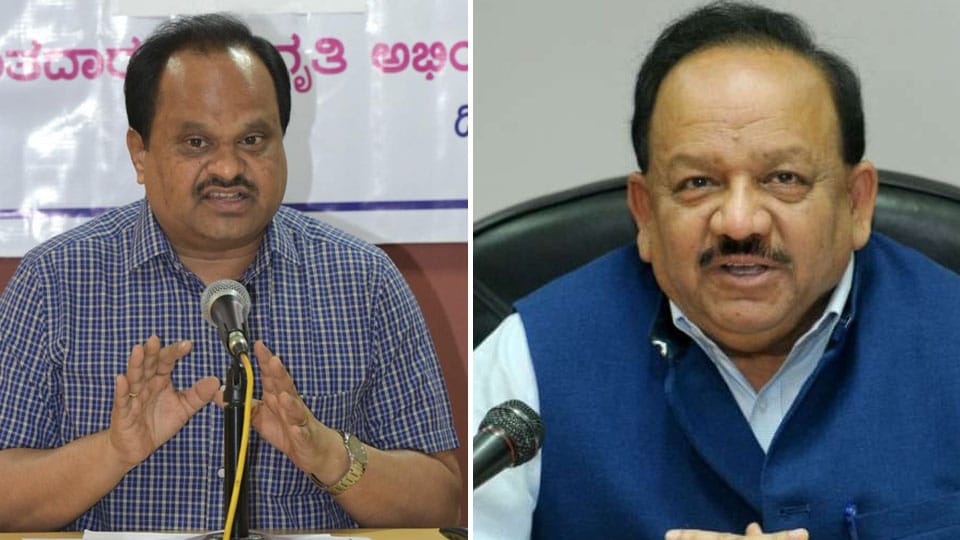 The Union Minister was particularly appreciative of the fact that Chamarajanagar has been able to achieve a Green status despite sharing borders with Tamil Nadu and Kerala where high incidents of COVID-19 are being reported day in and day out.

Dr. Harsh Vardhan asked the DC to maintain the status and appreciated the efforts of the District Officers where testing have picked up full pace and a large population is being covered under the net. Large-scale testing, tight borders, increased vigil, effective monitoring by all block level, taluk level and district level officers have yielded the results, the Minister said.

Not that there were no suspect cases in Chamarajanagar. The district had its share of participants in a religious gathering in Delhi as well as international passengers returning home. Close to 3,000 suspected cases have been tested so far and all have turned negative.

There was a constant vigil at the borders from January itself and strict enforcement of home quarantine for all Tamil Nadu and Kerala returnees was ensured with help from villagers. Chamarajanagar has also received requests of migrants from Maharashtra, Delhi, Gujarat, Rajasthan, Tamil Nadu wanting to come back home. The district has approved only emergency requests, said Dr. Ravi.

Rigorous screening at check-posts set up on the borders has enabled Chamarajanagar to remain a Green Zone. Lockdown in the district was strictly enforced from the very first week of March. There are six check-posts across Chamarajanagar and the officials and staff subject every person entering the district to stringent medical examination.

“Over 900 people had registered in the Seva Sindhu portal from various outer State places and the Chamarajanagar administration has only approved 400 emergency cases. Of them, 97 have arrived so far. Close to 200 persons who had entered the district from other States bypassing the Seva Sindhu portal approval were traced by villagers and they were all quarantined,” he said, attributing the success of the district to extended cooperation from villagers too.

“I had not expected Union Health Minister’s call. I felt happy and I was glad to receive the call. Chamarajanagar has gained national attention and we will do our best in retaining the Green status,” the DC added.