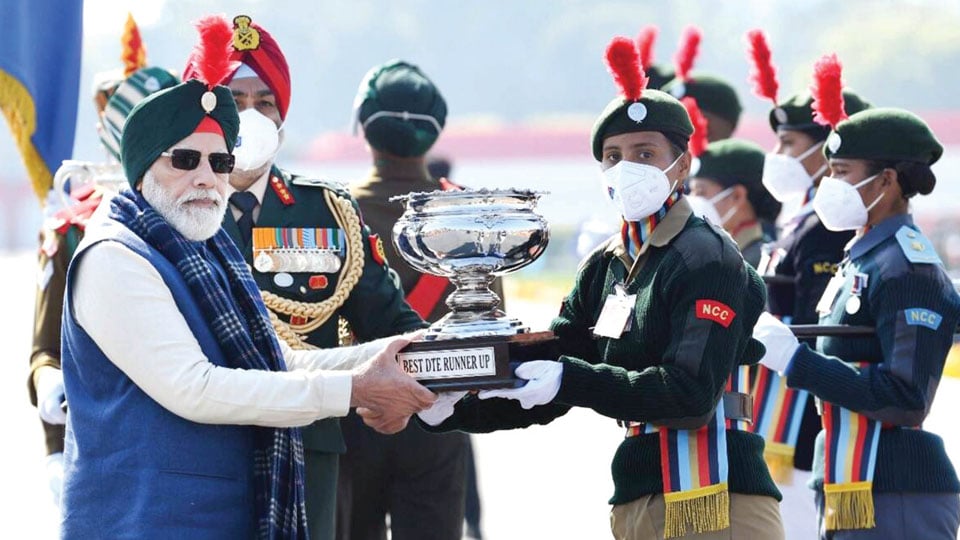 New Delhi: Prime Minister Narendra Modi on Friday warned against the “dangers of misinformation” in digital age and asked NCC cadets to counter it with awareness campaigns.

Addressing National Cadet Corps (NCC) Rally at Cariappa Ground on Jan. 28, the PM said, “Today on the one hand there are good possibilities related to digital technology and information, on the other hand, there are dangers of misinformation. It is also necessary that the common man of our country should not fall prey to any rumour. The NCC cadets can run an awareness campaign for this.”

The PM asked NCC cadets to combine their aspirations and action with the development and aspirations of the country. He said that the cadets should come forward to engage with school drop-outs and try to remove their obstacles to ensure education to them.

There is another area which needs our attention — deteriorating imbalance in virtual and real life. NCC cadets can work in this direction, he said.

The PM stressed that drugs should not reach the school/ college where there is NCC or NSS. He advised the cadets to be free from drugs themselves and, at the same time, keep their campus free from the menace.

He stressed that the students should help their non NCC-NSS friends to give up this bad habit.

Modi remembered with pride his NCC connection and credited his training as an NCC cadet for giving him the strength to carry out his responsibilities towards the nation.

He noted the presence of the large number of the girl cadets in NCC and termed it to be a symbol of changing attitude of the nation. “Daughters are taking admission in Sainik Schools and women are getting major responsibilities in the Indian Army. The daughters of the country are flying fighter planes in the Air Force. In such a situation, it should be our endeavour that more and more daughters are included in NCC,” he said.

The Prime Minister paid tributes to Lala Lajpat Rai and Field Marshal K.M. Cariappa for their contribution in nation building as both have their birth anniversaries on Jan. 28.

In the beginning, the PM inspected the Guard of Honour, reviewed March Past by NCC contingents and witnessed the NCC cadets displaying their skills in army action like slithering, microlight flying, parasailing etc. The best cadets also received medal and baton from the Prime Minister.

3 COMMENTS ON THIS POST To “Counter misinformation in digital age: PM to NCC cadets”