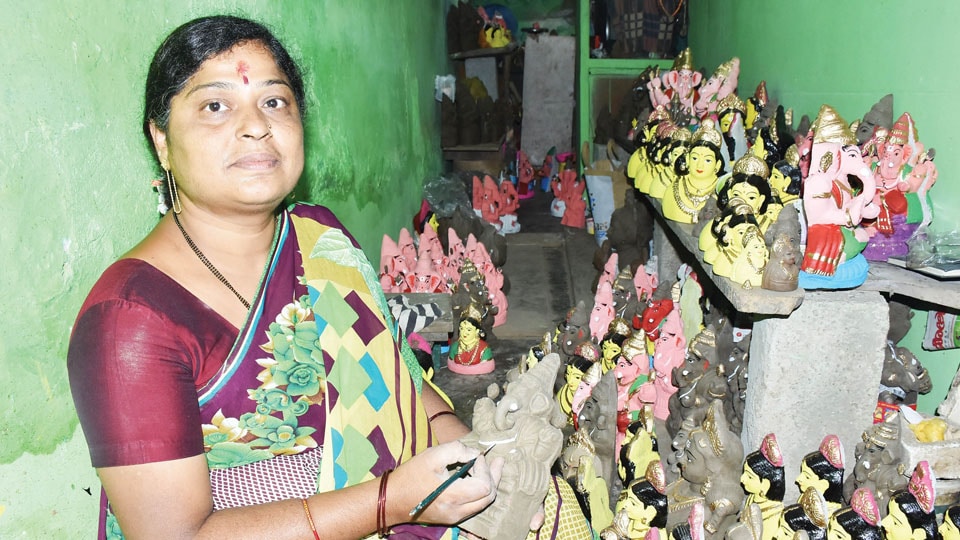 Mysore/Mysuru: Following the State Government’s guidelines restricting the Ganesha Chaturthi Festival celebrations in order to check the spread of COVID-19 pandemic, one of the most affected people are traditional Gowri-Ganesha idol-makers in the region.

In Kumbarageri alone, which is located near Gandhi Chowk in city, there are over 20 families, who have been depending on this profession for their livelihood.

Other than householders who celebrate the festival with much gaiety every year, hundreds of community or ‘Sarvajanik’ Ganesha idols are installed at mantaps and pandals in numerous localities across the city.

People, especially youth, come together and form their own small communities to venerate Ganesha by setting up special colourful pandals or stalls at almost every lanes and by-lanes across the city where intricately carved Ganesha idols are installed.

Daily prayers and prasadam are offered for three to seven days. At the culmination of the festival, Ganesha idols are taken through the streets in a procession to immerse in the nearby lakes or rivers.

Due to restrictions imposed by the Government this year, fortune seems to be not smiling on more than 60 to 80 small and big potters in the city.

Speaking to Star of Mysore, a traditional potter whose family has been involved in idol making from many generations said, “Idol making is a tedious process which begins six months before the festival. This year, none of us are certain about the number of idols we are going to sell. This is going to be financially devastating for us because nearly 60 to 80 families in Mysuru city and over 150 families in the district are earning their livelihood with this.”

Venkatamma, another Ganesha idol maker residing in Kumbarageri, said: “The Government has provided financial aid to all but left out potters. Last year, we could sell over 3,000 Ganesha idols, but this year, we have prepared only 1,000 idols. Almost all of them are smaller ones. From the past 25 years, I have been dependent on this profession to earn my daily bread. They would have allowed to install idols in public places for at least three days. Only potters have been left out of special Coronavirus relief package. We would request authorities to come to our aid and provide some amount as relief package for all Ganesha idol makers.”