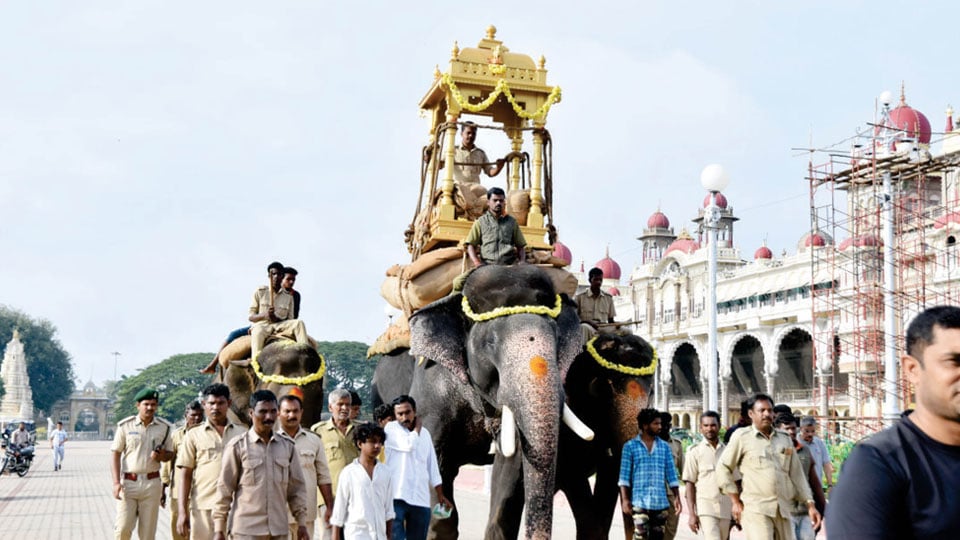 Mysore/Mysuru: With 2020 Dasara destined to be a low-key affair owing to COVID-19 pandemic, the Forest Department has written to the State Government seeking clarity on identifying and bringing elephants from the forests for the celebrations.

Usually, the process of selecting elephants for Dasara takes place in the month of July every year. Forest officials, following instructions from the Government, visit various elephant camps where elephants are housed and conduct health check-up. Later they used to give fitness certificates to the elephants to participate in Dasara festivities.

As per the laid-down norms, the list of elephants fit to participate in Dasara was then sent to the Principal Chief Conservator of Forests (PCCF), who would then forward the same to the State Government for approval. The list of elephants prepared by the Forest Department usually has the names of 12 to 14 elephants, their age, suitability for the festival, behaviour and the capacity to obey orders issued by their mahouts and kavadis.

This year, however, there is no clarity on the scale of celebrations. The State Government has already indicated that Dasara will be a low-key affair this year in view of the pandemic.

To cater to domestic and international crowds, and to prevent hurting religious sentiments, it will go online like it was done in Odisha during the Lord Jagannath Rath Yatra.

Minister of Tourism, Kannada and Culture C.T. Ravi had told reporters sometime back that Dasara celebrations will be a low-key affair. “Based on inputs from all stakeholders and the number of cases in the coming days, a final decision will be taken. However, there will be no large scale gathering and the event will be streamed live,” he had stated. The Government will also decide on which traditional festivals and sports can be held as part of the Dasara festivities.

Forest Department sources said that so far they have not got any communication regarding the elephants from the State Government. Elephants play a crucial role in the festivities and the grand finale is nothing but the march of caparisoned elephants from the Mysore Palace till Bannimantap on the Vijayadashami day. The 750-kg Golden Howdah-carrying elephant is usually the cynosure of all eyes.

From the moment the elephants are brought from the forests, they are subjected to rigorous training for over 60 days and nutritious food is given to them for them to increase weight and also training is provided to them so that they are acclimatised to the rigorous regiment to be followed during the festival. Only after consuming nutritious food for over 60 to 70 days and rigorous training during this period, the elephants become fit to participate in the Vijayadashami procession.

As there is no communication from the State Government, Deputy Conservator of Forests (DCF)-Wildlife Alexander has written a letter to the Government to guide the Forest Department whether to start the elephant selection process or withhold it. “We are awaiting reply from the Government and will act accordingly,” Department officials said.

Due to the pandemic this year, discussions are going on in the Government level to restrict the ‘Jumboo Savari’ within the Palace premises only and not go for a full-fledged procession till Bannimantap. However, the Government has to take a call on the scale of the celebrations.