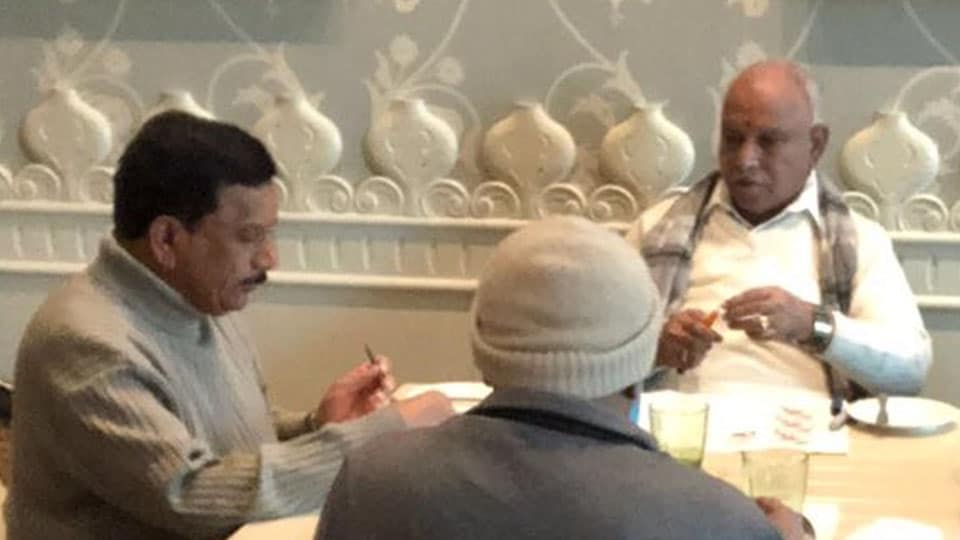 Though it will be difficult for the BJP to mop up the required numbers to form a Government, the party wants to prove that the coalition experiment in Karnataka is a failure. Party leaders seem to have taken a calculated risk as, if the coalition Government falls, the BJP can come to power. With BJP in power in Karnataka, it will help the party in the Lok Sabha polls, party leaders feel, said sources.

Highly placed sources and TV reports said this morning that yesterday, Karnataka Prajnavantha Janata Party’s R. Shankar from Ranebennur Assembly segment and H. Nagesh, an Independent MLA from Mulbagal segment in Kolar district, pulled out from coalition Government as part of the BJP’s efforts to declare the seven-month-old coalition a failure.

Karnataka BJP MLAs are at present lodged at a luxurious resort in Gurugram near New Delhi and the entire resort has been occupied by the MLAs. Sources said that each room in the resort costs Rs. 30,000 per day.

This noon, when we went to Press, BJP State President B.S. Yeddyurappa was holding a meeting with the BJP lawmakers at the Gurugram hotel. Sources said that Yeddyurappa has told the law-makers that over eight MLAs from Congress were ready to jump the ship and cross over to the BJP. Even TV reports say that eight Congress MLAs are likely to defect later today. Initial reports said that over 11 MLAs were ready to defect from the Congress.

Amidst political crisis in Karnataka, a Congress Legislature Party (CLP) meeting has been called on Jan. 18 in Bengaluru. Karnataka Water Resources Minister D.K. Shivakumar claimed the party was aware of “what has transpired (in Mumbai hotel where a few Congress MLAs are camping) and how much has been offered to them (by BJP).”

Meanwhile, the Congress reached out to Independents who left the coalition government yesterday and urged them to rethink their decision. Karnataka Congress In-charge K.C. Venugopal said that he was in touch with all the MLAs. “This drama is going to end in a day or a two. We are all together and there is no internal fight in Congress. This is all baseless,” he added.

Sources said that the Congress is planning to counter BJP strategy by promising Cabinet berths to four BJP MLAs in order to lure them. Even Chief Minister H.D. Kumaraswamy had yesterday said that some BJP MLAs are in his touch. “Our coalition government is running smoothly. I am relaxed. We are in touch with all our legislators and have their support,” he said.

3 COMMENTS ON THIS POST To “Crisis deepens as Congress, BJP lure MLAs holed up at hotels”