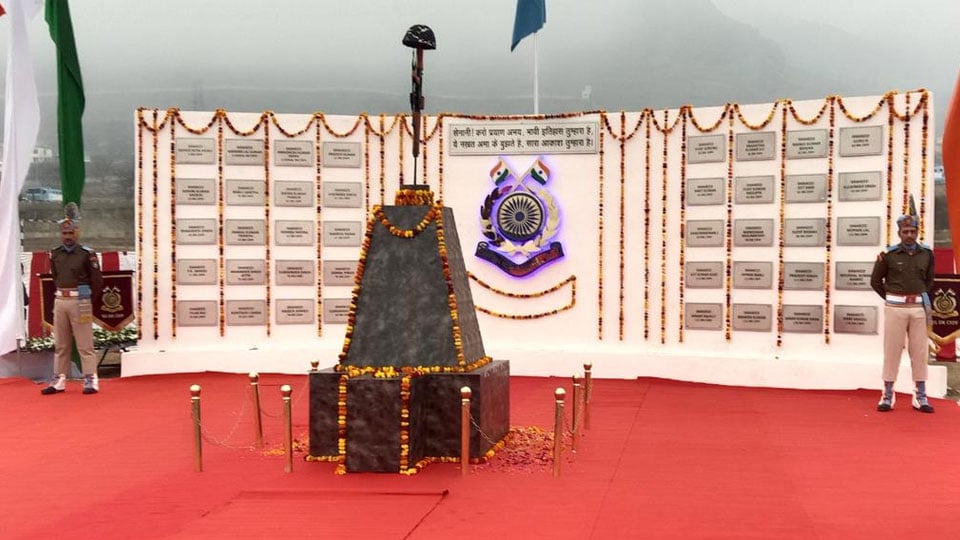 New Delhi: Today (Feb. 14) is the 1st anniversary of the gruesome Pulwama terror attack that killed 40 CRPF jawans. As the nation mourns and honours the supreme sacrifice of our soldiers, the CRPF has inaugurated a Memorial to respect and commemorate memories of jawans who had to pay the ultimate price.

Prime Minister Narendra Modi led the nation in paying tribute to the personnel killed in Pulwama and said that India will never forget their martyrdom. “Tributes to the brave martyrs who lost their lives in the gruesome Pulwama attack last year. They were exceptional individuals who devoted their lives to serving and protecting our nation. India will never forget their martyrdom,” Modi tweeted.

The Memorial has been erected at CRPF’s Lethpora camp near the site where the attack took place. On Feb. 14, 2019, a Jaish-e-Mohammed terrorist rammed explosive-filled vehicle on a bus ferrying CRPF jawans. The bus was part of CRPF convoy.

“It is a way to pay homage to the brave jawans who lost their lives in the attack,” Additional Director General of CRPF Zulfiquar Hasan said after a visit to the site. The names of all the 40 personnel along with their pictures will be part of the memorial along with the moto of the Central Reserve Police Force (CRPF) — ‘Seva and Nishtha’ (Service and Loyalty).

“It definitely was an unfortunate incident and we have learnt our lessons now. We were always extra alert during our movement but now an extra layer of alertness has been added to it,” Hasan said. “We fight with extra vigour during an encounter with terrorists and that is why we were able to eliminate the entire Jaish-e-Mohammed commanders immediately after the attack on our jawans,” he said.

The Ministry of Home Affairs had also allowed the CRPF to carry its troops by air to avoid the possibility of any such attack. The Jammu and Kashmir Government had imposed a ban on plying of private vehicles on two days in a week to facilitate movement of troops. The order was later rescinded after the situation became normal.

The Memorial has been set up inside a CRPF camp adjacent to the place where Jaish-e-Mohammed terrorist Adeel Ahmed Dar, driving an explosive-laden car, blew himself next to a convoy of security forces killing the 40 personnel. Almost all the conspirators behind the dastardly attack have since been killed.