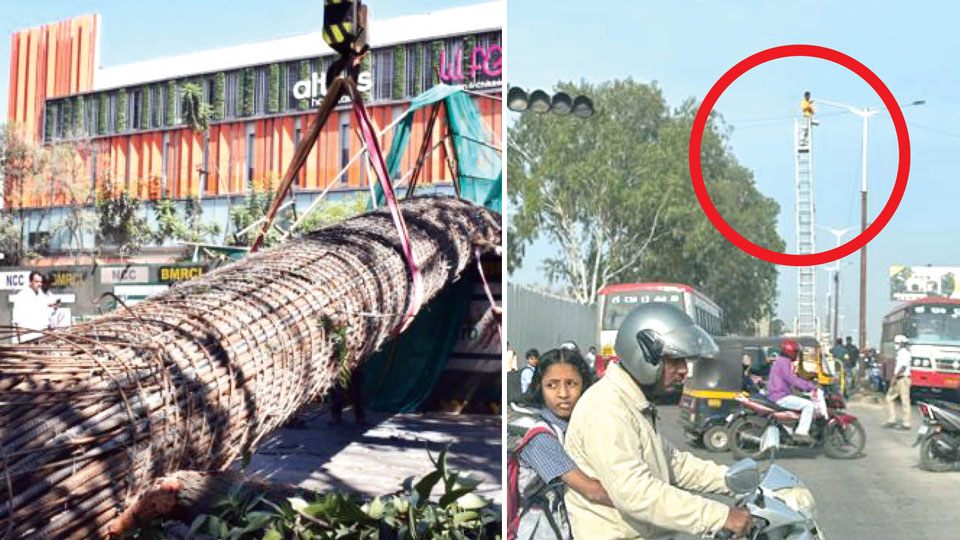 On Tuesday, a 28-year-old woman and her two-and-half-year-old son were killed after a reinforcement structure made of iron rods for constructing a Namma Metro pillar crashed on a bike-borne family in Bengaluru.

Ironically, most public works — the very exercise of doing something good for the public — are done in a manner that is most unsafe for the public.

A bridge in Gujarat collapsed just a few months ago, and 141 people died. According to a study published in the journal, “Structure and Infrastructure Engineering,” between 1977 and 2017, about 2,130 bridges collapsed in India.

But by far, the worse public work that hinders the public is road work. As they lay roads in the middle of the day, it creates traffic congestion and sometimes strings of hot tar blown by the breeze stick and burn bike riders. After all this, within a week, the potholes are back.

No wonder the Supreme Court stated that it had found something very “unacceptable and frightening”, and it wasn’t talking about corruption or terrorism but potholes! This, after the Court-Appointed Committee on Road Safety, showed data that potholes had killed more Indians than terrorism!

The Supreme Court, while calling these deaths “a tragedy that arises only due to lack of concern by authorities,” also rued, saying, “Unfortunately, no criminal action is taken against authorities for their negligence.” It then sought a response from the Government on how to address this problem. But…

Isn’t this like asking the fox to find a way to protect the chickens from the fox itself? After all, in most cases, the lawmaker forces the bureaucrats to give public works contracts to their “party”-approved contractors.

Maybe, the Court can ask the Police to do their job instead because there is already a provision in law to book cases against institutions and people who put citizens’ lives at risk.

Under Section 304A of the Indian Penal Code, “Whoever causes the death of any person by doing any rash or negligent act not amounting to culpable homicide, shall be punished with imprisonment of two years, or with fine, or with both.”

But the Police, to save their fellow Government servants, book the victims instead! Like it happened in both Bengaluru and Mumbai.

In Bengaluru, the Police booked a man for negligent driving when in fact, he lost balance after hitting a pothole on the Devarabeesanahalli flyover throwing his wife, who was riding pillion, to the ground, killing her!

In Mumbai too, when a lady went to file a case against the road contractor as the pothole had caused an accident, killing her mother riding a pillion, she was shocked when the Police booked a case against her instead. The Thane Police even had the audacity to say, “Driving carefully is the responsibility of the driver and she was negligent so we have booked her!”

But when it comes to VVIPs, the law is conveniently applied as it happened in Delhi where the Delhi Court punished a PWD Assistant Engineer as he had “remained negligent in discharging his official duty and did not prevent the breeding of Aedes aegypti mosquitoes in the District Court Complex.”

Well, it seems five Judges fell sick due to the mosquito problem. We wonder if that Thane Police Officer would dare tell the mosquito-bitten Judges that it is their responsibility to apply mosquito repellents knowing there were mosquitoes and refuse to book the PWD engineer.

For now, the Supreme Court can ask the political parties to pass the Motor Vehicle Amendment Bill 2017, which has been stuck in the Rajya Sabha since April 2017, even though the Lok Sabha has passed it.

This Bill has an important amendment that holds road contractors, consultants and civic bodies accountable for accidents caused due to faulty design, construction and poor maintenance of roads.

If this Bill passes, people will hold Government bodies and personnel accountable before a competent judiciary.

One wonders why public works are not undertaken during the night. In most countries, all city maintenance work, from cleaning the roads to pruning the trees to changing the street lights, is done at night when the public is least disturbed, so why not follow the same practice here in our city?

In 2019, the Delhi Transport Minister Gopal Rai directed all three, Delhi Metro Rail Corporation (DMRC), Public Works Department (PWD) and Delhi Jal Board, to carry out construction and repair works only at night.

All of us have seen how, at 9 am peak hour traffic, Government contractors paint a zebra crossing, blocking one part of the road and creating a bottleneck. Laying cables in the middle of the day is common across the city. Why can’t these activities be conducted at night or during the wee hours when vehicular traffic is at its minimum?

During these hours, the public is not disturbed, the economy is not affected, life is not at risk and road rage is non-existent. Moreover, it is easier to see a well-lit coloured light and warning signs from a distance at night than during the day.

But then public work contractors do not follow proper safety protocol either. They do not place appropriately sized signages and warning boards much ahead of the work site. Because of this, motorists need more time to react and slow down! Every public work suddenly pops up like a jack in the box.

On May 21, 2015, Mumbai High Court, in an interim order, held that the “right to have properly maintained roads is part of the fundamental right guaranteed by Article 21 of the Constitution of India and in the event, any loss is caused due to its violation, the citizens have a right to seek compensation.” But alas, who cares?

In 2014, it was reported that to have good roads, a Joint Commissioner of the Public Works Department in Chennai, Vijay Maruti Pingale, wanted to name and shame contractors, so he uploaded a list of contractors who had done a shoddy job and blacklisted them. He was transferred.

Do we deserve such irresponsible treatment? As the saying goes, “Find out just what people will quietly submit to, and you have the exact measure of injustice and wrong which will be imposed upon them.”

Government services are the only paid services that do not give even a minimum guarantee of service after having collected payment for it! No Consumer Court for them.

For now, death caused due to unsafe practices in public works is becoming common; Be it collapsed bridges, flyovers or falling metro pillars. We need to take note. As India deploys massive infrastructure projects in preparation for massive urbanisation, authorities must at least ensure they are built safely without killing its citizens.