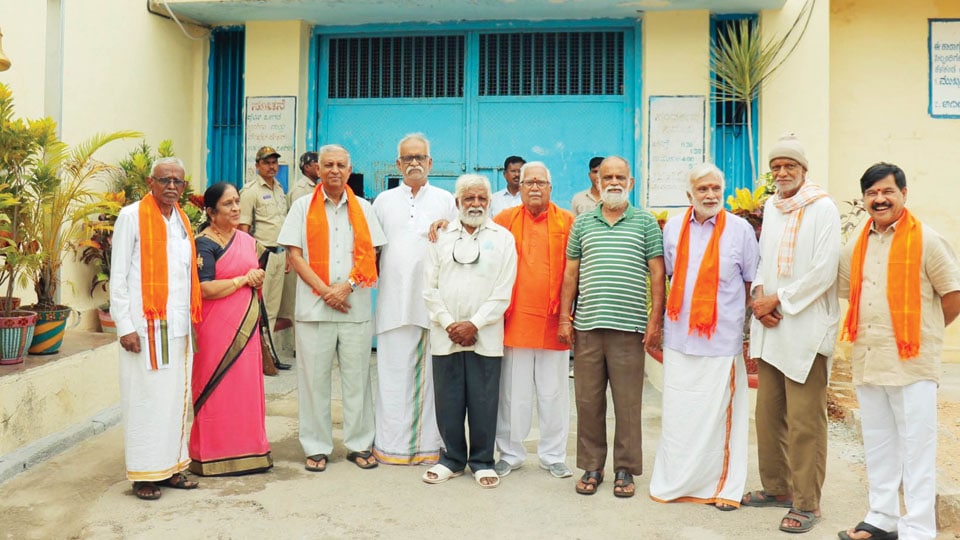 Mysore/Mysuru: The dark days of the Emergency imposed on India by former Prime Minister Indira Gandhi were remembered in a novel way yesterday morning at the outer boundaries of Central Jail premises in city.

The event was organised by Krishnaraja BJP under the leadership of MLA S.A. Ramdas. Apart from felicitating those who underwent jail terms during the Emergency, they had a chance to visit the jail barracks where they were stationed during the Emergency. They visited the rooms and recalled memories of a dictatorial rule and how they suffered and became bolder.

It was on June 27, 1975, that the Emergency was declared 47 years ago under the Indira Gandhi regime. On this day, the Congress party snatched the constitutional rights of everyone in India for power and imposed the Emergency.

On the midnight of June 25, 1975, President Fakhruddin Ali Ahmed declared the Emergency under Article 352 of the Constitution. The Emergency was imposed after Indira Gandhi faced massive protests calling for her resignation after the Allahabad High Court declared her 1971 Lok Sabha election victory invalid.

Jail term was a transformative

Thontadarya said that the Emergency is considered a dark phase in the history of independent India. The period was marked by reports of censorship, frequent human rights violations and State incarcerations.

“Thousands of people who spoke against Indira Gandhi were jailed and many died inside the jails. For me, the jail term was a transformative one that made me think about the country that was victimised with iron hands of people like Indira Gandhi and her son Sanjay Gandhi,” he said.

“The Emergency gave birth to Jan Sangh that became the Bharatiya Janata Party later and also Janata Party. The Emergency was lifted after 18 months and fresh elections were held in 1977. The Congress was voted out of power for the first time since 1947 with Indira Gandhi and her son Sanjay Gandhi losing from their bastions Rae Bareli and Amethi,” he recalled.

“The imposition of the Emergency was brutal, sudden, insidious, systematic and systemic and undermined our collective being as a society. But what was heartening is that the Indira               Gandhi’s rule was defeated and the Congress was washed out with only a couple of seats. Such was the public anger,” Thontadarya recalled.

Every year, the Krishnaraja BJP volunteers used to go to individual houses of those who underwent jail terms during the Emergency and would felicitate them. This time, the event was held outside the jail premises. Permission was sought from the jail authorities to visit restricted areas where the Emergency prisoners were housed in 1975.