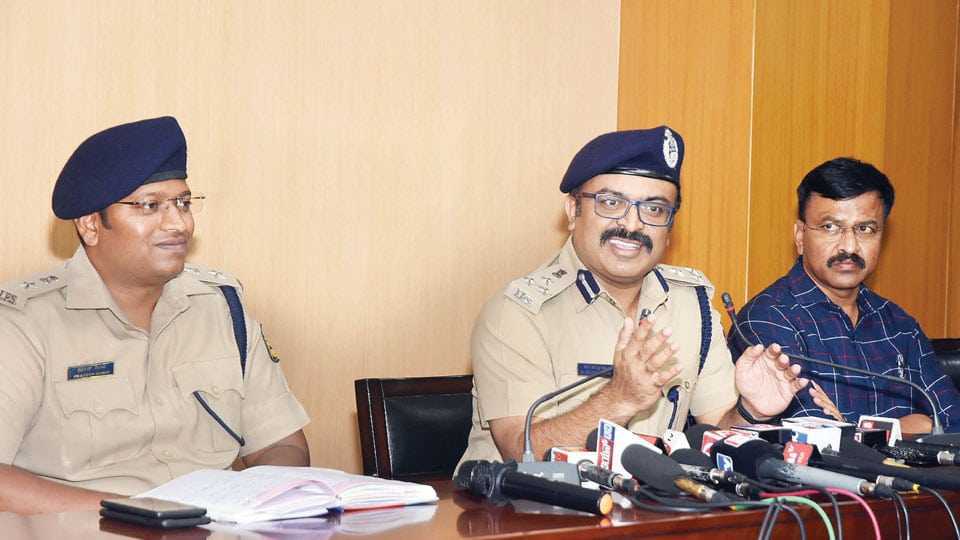 Mysore/Mysuru: In a major breakthrough, the City Police have arrested five persons on charges of kidnapping a 12-year-old boy, who is the son of a doctor-couple.

The arrest was made within 12 hours of the crime and the accused were rounded off from Virajpet in Kodagu. The boy went missing around 7.15 pm on Thursday and returned home around 2 am on Friday.

The prime accused in the case had worked with the family of the victim as a day-care male nurse and he had hatched the kidnap plan. Solving the case, the Police have warned the public not to appoint any persons for home services without a background verification.

The boy was cycling near his house on Thursday evening and it was his usual routine. On that day, kidnappers caught him and bundled him into a car 150 metres from his house at Srirampura Second Stage near the Lingambudhi Lake Road. However, he was released the same night.

Speaking to reporters at his office yesterday, City Police Commissioner Dr. Chandragupta said that the teams have seized two cars and five mobile phones that had been used in the crime. Both the cars had yellow board registration number plates and one of the cars had been taken on rent as a self-drive vehicle.

“The prime accused in the case was working as a male nurse for the abducted boy’s grandfather for a few days and had detailed information about the family. He knew the boy’s routine and also that his parents were doctors and would be out of the house on duty. He knew their financial background well. He had borrowed loans and was in desperate need of money and he had planned some other crime but ended up kidnapping the boy as he thought that the boy would be an easy target,” the Commissioner said.

After planning the crime, the main accused joined hands with the other accused, all of whom are in the age group of 20 to 25 years, for the kidnap. Of the five accused, two were employed with a private company providing day-care services to elderly people and patients while two others worked as drivers and another was unemployed, he added.

All of them teamed up hoping to clear their loans.

“It was a night-long operation and fortunately, the boy was unharmed. Though we did not get the CCTV footage of the actual crime, we had got supporting data from the eyewitnesses and some technical details. We had passed on information about the boy to the Police of other districts as well,” Dr. Chandragupta added.

Refusing to share the operational details of the Police action, Dr. Chandragupta said, “I cannot reveal many details at this juncture and for us, the boy’s safety was paramount,” he said.

On the ransom paid, he just said, “we had to use a bait to catch the fish. The bait and the fish have been recovered” indicating that the ransom was paid to catch the accused and later the money was recovered.

The Police Commissioner has asked the public to be careful while appointing people to take care of the elders and senior citizens at home.

“People must ensure that they get the antecedents of day-care nurses and also the agencies who employ them verified by the Police before employing them. These days, as both the husband and wife are employees, they find it difficult to take care of the elderly at home and they usually hire day-care nurses or home nurses. A proper Police verification has to be done before employing such people for service,” he added.

Even the manpower agencies, which provide nurses, drivers and other workers to the general public, should compulsorily have the antecedents of employees verified from the Police, he added.