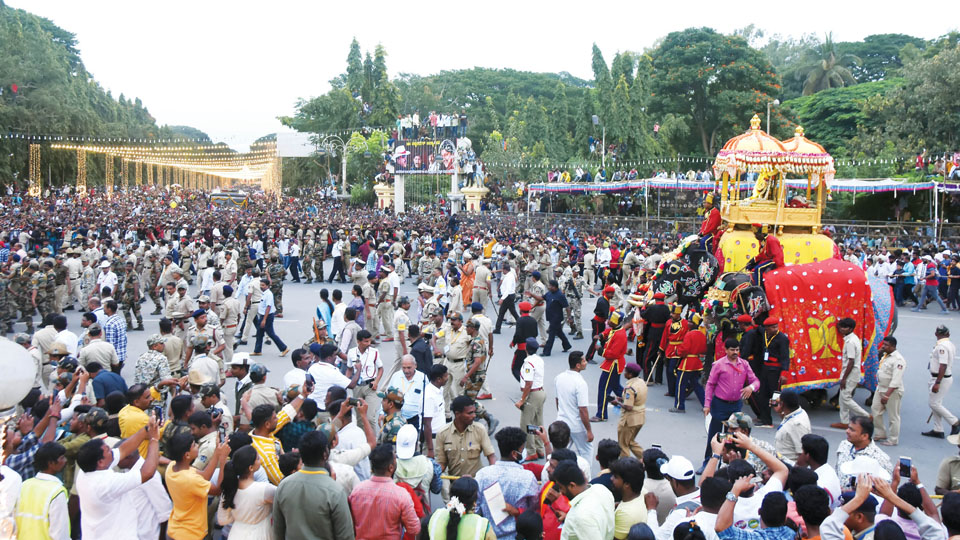 The Dasara-2022 has come and gone.  62 troupes, 48 tableaux, over 1,500 artistes,  a logistic nightmare. I should congratulate the District Administration for managing this event without a hitch as I am writing this article. Except for the lighting of the roads, the Food Festival, Flower Show and to some extent the vintage car rally which was commendable, did you notice anything different this year?

Of course, as usual all the officials and the netas will claim the grand success of this event. For them photos of the milling crowd is sufficient proof of the success of the event. This event is supposed to bring tourists both international and domestic back to Mysuru in droves. The event is over. Is it happening?  The answer is a resounding “No.”

Dasara is a lifeline for all the people living in the surrounding villages and small towns. So they all make this “Jatre” year after year irrespective of the money spent on the event.  For any tourist destination to prosper, it is important to have at least 30 percent of visitors in high end category.  This is missing at Mysuru. All high end tourists are giving it a miss and going to Coorg and Chikmagalur. International travel is down to a trickle.

I do not blame the officials concerned. Dasara Sub-Committees were formed just 45 days back. What  can one expect? As I had predicted, old files were dusted and the same old programmes were put in place. So much so, several artistes who had been announced for the events gave it  a miss ! Yes,  Mysuru was milling with crowds. But please ask the stakeholders of the tourism industry. Were the hotels full on all the days of Navarathri or only on last 3 days of Dasara?

Did the shopkeepers make money by way of increased sales or the crowds just did window shopping? The  travel trade is furious. Why in spite of having a huge budget not  a single advertisement by way of TV commercial was put up in any major metro cities? I do not blame the Tourism Department. They just do not have any 30 seconds TV footage. Had the Department commissioned any professional photographer to take photos of this event ?

Majority of the crowd on the last 3 days will be from Bengaluru and nearby towns around Mysuru. Why was the Tourism Minister absent on all the major days of the festival ?  Where are the so-called foreign tourists ?  The invitation card of the so-called Tourism Day festivity was full of politicians and not a single travel industry stalwart was invited. Why?

So many questions and no answers. I was told that about 300 foreign tourists were present for the event.  Showing off yoga and University students as foreign tourists is an old  ruse resorted by the officials to please the bosses. Why the gold cards were not printed on time? Gold cards were printed after the inauguration due to the hue and cry resorted to by the industry body.

During Dasara, at least some roads get repaired but this time with the arrival of the President of India, the same roads which had been repaired for PM Modi’s trip was redone. So we have to wait for another vvip to come to Mysuru to get some more roads asphalted!

I do have a complaint with the local travel associations too. Why have they not taken the initiative to invite top travel agents and travel writers and honour them on this occasion? Why depend on the Government for everything?

A peculiar trait was noticed at the Yuva Dasara this year. A section of the crowd continuously shouted “Kannada song haadi” to senior Hindi playback singers. Many a singers like Sonu Nigam obliged but others were embarrassed. New trend. Maybe Mysureans prefer local artistes who can belt out               Kannada songs.

The only way this mess can be sorted out is by announcing  a “Permanent Dasara Committee” with a few local well-informed citizens a part of it. The whole show can be conceptualised by January and executed perfectly with some new ideas and vision. The Prince in his silver chariot with about 200 men dressed up in the traditional attire with spears etc., should be a part of the procession. Heritage sells. Anyone listening?

Recently I was reading with interest a suggestion put forward by the industry body to start a direct train from Mysuru to Goa. Excellent idea. Goa gets about 100 charters every year who stay for 15 days in Goa. When I was heading the Ashok travel and tours in New Delhi, I had met several charted companies who suggested that after about 12 days on the beach several tourists get bored and some of them at least want to explore heritage city nearby for 3 days.  Mysuru is the only city nearby Goa that can offer Palace, wildlife, temples etc., to  foreign tourists at a single destination. So, if there is a daily train from Goa with “vistadome coaches” apart from a direct flight, this market can be tapped. Since the route passes through several famous temple towns, this can improve our domestic travel too. Our   MP Pratap Simha, who has been responsible for several new initiatives, can consider this idea too.

Bcci is keen to develop a stadium in Mysuru. Even if two or three matches are held every year, tourism will bloom multi-fold. Since  live telecast of every match is done to nearly all cricket loving countries, what is the hitch?

Devaraja Market, Lansdowne building, Town Hall… When will the administration take a decision either way. If they are looking for a consensus, it will never come. Vested interests.

What is the status of the Film City planned at Mysuru ? Unless the plan is finalised every Minister in Karnataka would try to take it away to their city. Why not invite Disney or Universal Studio for this project? The Chief Minister could have invited some industry czars like Adani, Ambani or Mittal for the Vijayadashami procession and honoured them. Imagine the PR coup.

Rural tourism, medical tourism, yoga tourism…the list is endless. You spend Rs. 35 crore instead of Rs. 25 crore. Does it make Dasara grander ? This charade has to end. Have we missed the bus this year too?