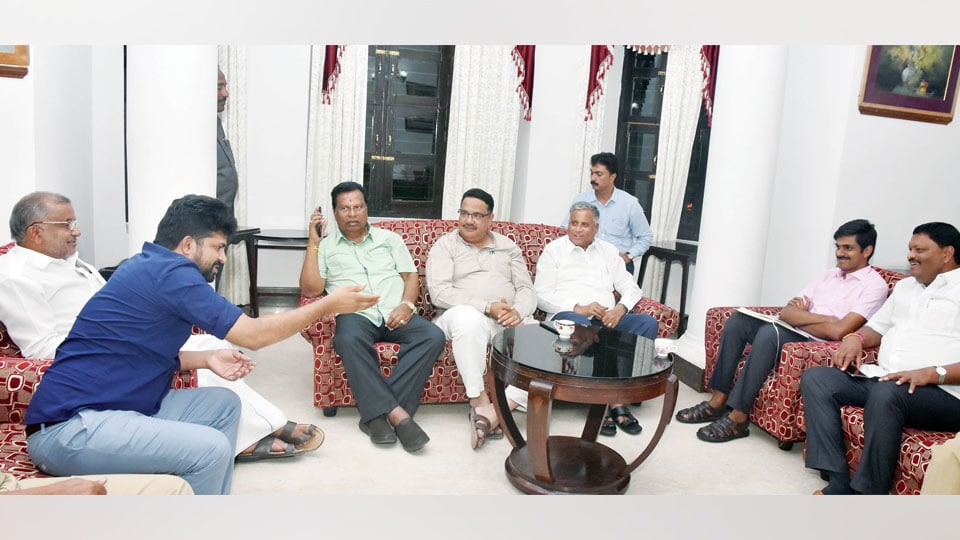 Mysuru:  In a bid to make Dasara more inclusive with the participation of Opposition leaders, District Minister V. Somanna held a meeting with Congress and JD(S) leaders at Jaladarshini Guest House here yesterday.

Speaking at the meeting, Somanna said that he is heading Dasara preparations for the first time as District in-Charge Minister and appealed leaders from all political parties to co-operate with him in making Dasara-2019 a grand success.

MLA Tanveer Sait said that necessary steps have to be taken to end the confusion over seating arrangements for Torchlight Parade at Bannimantap.

Highlighting that Policemen from outside the district often fail to identify local Legislators and leaders, Sait observed that something has to be done to ensure that the Police personnel deployed for Dasara have some knowledge of local leaders.

Following Sait’s suggestion, Somanna directed the Police to ensure that local Legislators, MPs and other people representatives are given due respect.

Sait appealed the Minister to operate more buses to Chamundi Hill on Dasara inauguration day as there will be heavy rush.

However, Sait opposed the Minister’s idea of having a total of 32 members from the JD(S) and Congress for 17 Dasara Sub-Committees, saying that only a namesake representation of Opposition leaders will not make the Sub-Committees wholly inclusive.

MP Pratap Simha objected to Sait’s demand, saying that as an MP, he (Simha) was ignored in Dasara Sub-Committee from 2014-17 when Congress was in power, which led to a heated debate over the issue. However, things cooled down quickly as Sait and Simha agreed to hold talks on the issue.

READ ALSO  It will be a Dasara to remember this year

Periyapatna JD(S) MLA K. Mahadev wanted more buses for ‘Dasara Darshini’ as there are a large number of people who have not seen Dasara.

Responding to the MLA’s plea, Somanna said that the Government is operating ‘Dasara Darshini’ buses for free for people from rural areas, who can also visit Mysuru Zoo.

Pointing out that each of the 40 Mahout families staying in city for Dasara festival are given Rs.5,000, Somanna reiterated his plea for the co-operation of all.

Dasara District Minister V. Somanna
MLA’s car involved in yet another accident
Chidambaram in Tihar jail: What life behind bars will be like for former Finance Minister