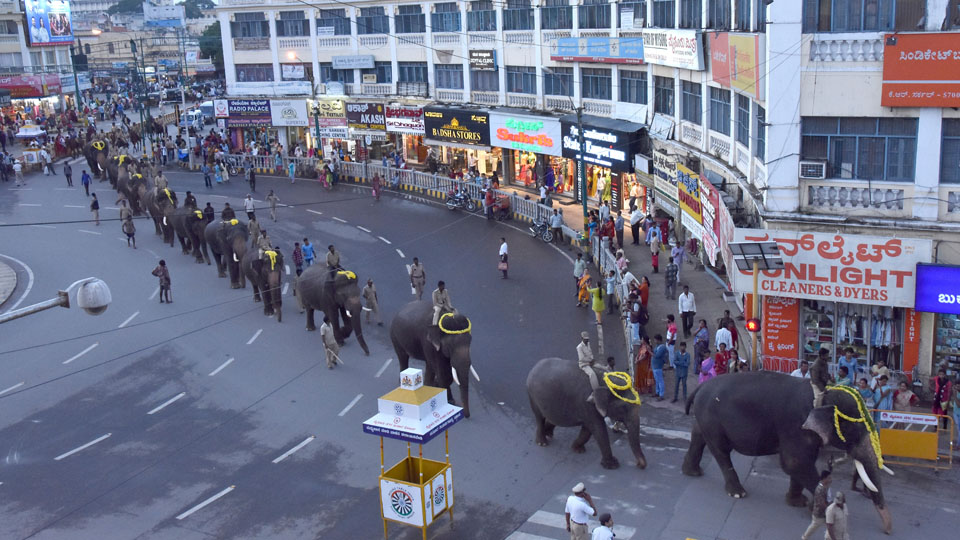 Dasara elephant ‘Eshwara’ likely to be retained for Jumboo Savari

Participates in this morning’s rehearsal

Mysuru:  The Dasara elephant Eshwara, which had shown signs of panic in the city environment during the Talim (rehearsal) and was to be sent back on the orders of District in-Charge Minister V. Somanna, has now been decided to be retained.

The 49-year-old elephant was behaving strangely during the rehearsal sessions. The Forest Department officials had brought this to the notice of the District in-Charge Minister.

As there should be no scope for any untoward incidents during the Dasara procession, Somanna had directed the officials on Monday at the Palace premises to take appropriate steps.

However, the Forest Department officials decided to wait and watch and included Eshwara in this morning’s rehearsal from the Mysore Palace to Bannimantap. It did now show any signs of panic, said the officials to Star of Mysore and hence they have decided to convince the Minister to see that Eshwara is retained.

Meanwhile, Abhimanyu one of the Dasara elephants, has been sent to Bandipur forests this morning to participate in the catching of tiger. He was transported in a lorry between 4.30 am and 5.30 am from the Mysore Palace. It may be recalled that a 55-year-old man had been devoured by a tiger at Kundkere Range of Bandipur Tiger Reserve recently and the half-eaten body was found by villagers. The same tiger is said to be eating cattle in the nearby villages and hence to catch this tiger Abhimanyu had been sent, said the Department officials.

According to a Supreme Court direction, elephants above the age of 60 will not be allowed to carry weight.

Arjuna, the Howdah-elephant, is 59 years old and this will mostly be his last Dasara when he will be carrying the howdah during the Jumboo Savari.

The next elephant in line is 53-year-old Abhimanyu who can carry the howdah for the next four years. By the time he retires another elephant has to be kept ready and according to the Forest officials, Eshwara, the 49-year-old, will be the ideal elephant to carry the howdah.

Though Eshwara is participating in the Dasara festivities for the first time, he has all the qualities to carry the howdah in the future, is what the Department officials feel. It was because he is exposed to the city environment for the first time, that he showed some panic reactions while on Talim due to the honking of horns and heavy traffic.

But this morning, he had completely calmed down during the rehearsal and the Department officials are hopeful that he will get acclimatised very fast in the next few days.

Hence, they have decided to convince the Minister to retain him instead of sending him back to the Dubare camp from where he was brought in the first batch of Gajapayana.

In all, there are 13 elephants out of which Gopi, who is suffering from Diarrhoea, is resting. Since he was brought in the second batch, the special food that was given to him might have caused indigestion. Now that he is undergoing treatment by giving him just about half kg of special diet, he is getting used to it and then he will be fed the special diet regularly.

Abhimanyu is sent on tiger operations but all the other 11 elephants, including Eshwara, are healthy and participating in the Talim regularly, said the officials.