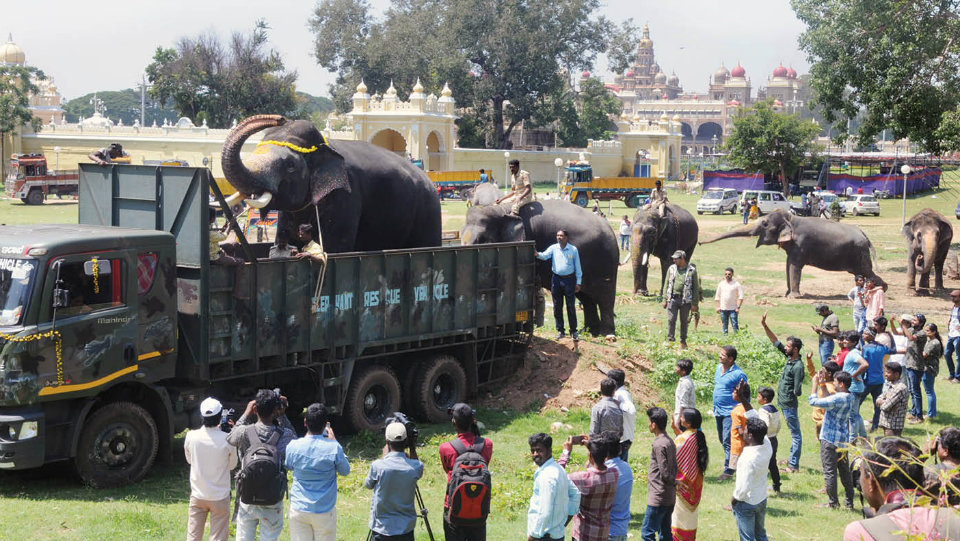 Dasara elephants back to jungle camps

Mysuru:  After a 46-day strenuous routine of rehearsals and the final Jamboo Savari, Dasara elephants, their mahouts and kavadis moved back to their respective elephant camps this morning with a promise that they would return next year. Their journey back into the woods began at around 12 noon and the team was escorted by Forest Department officials.

The first batch of elephants arrived at the Mysore Palace on Sept.6 while the second batch arrived on Sept.15. Today, nine elephants — howdah-elephant Arjuna, Balarama, Dhananjaya, Drona, Cauvery, Chaitra, Prashantha, Abhimanyu and Varalakshmi — left to their respective elephant camps. It was Arjuna who boarded the truck first today and all the trucks were escorted by a Forest Department vehicle.

Nishane Aane (for Khas Durbar) Gopi, Pattada Aane Vikrama and female elephant Vijaya stayed back at the Palace as the Vijayadashami celebrations at the Palace will be held tomorrow (Oct.22). Vijayadashami was not held on Oct.19 as two royal family members — Puttarathnammanni, mother of Pramoda Devi Wadiyar and Vishalakshi Devi, the youngest daughter of the last ruler of Mysore, Jayachamarajendra Wadiyar and the youngest sister of late Srikantadatta Narasimharaja Wadiyar — died on that day.

Today, breakfast was arranged for all the mahouts and kavadis and their families and they relished on Idly, Vada, Pongal and tea, coffee. After this, the family members packed their bags and baggage and loaded them on trucks. One-by-one, the elephants climbed the trucks and left the city. 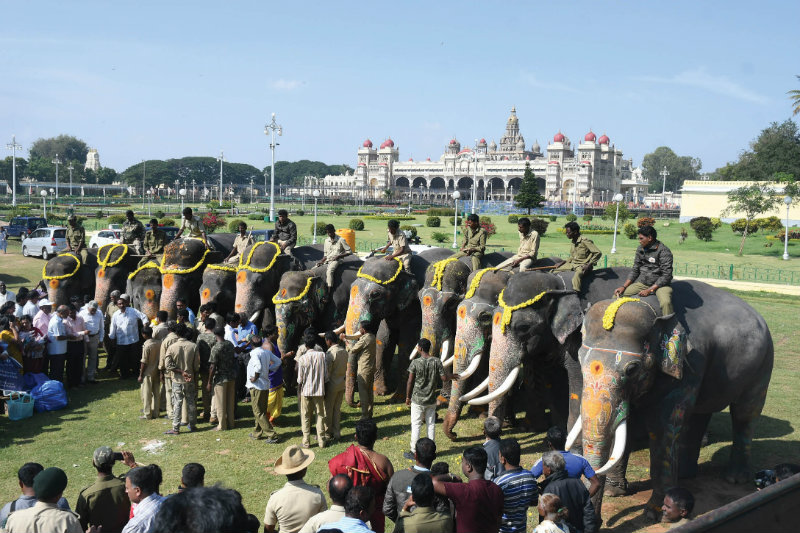 “We will cherish our experience inside the Palace and even on the streets. All these days we were VIPs and now, we are back into our lives inside the jungles. Here, many people used to come and hand over food and gifts to us. We will miss that,” said Vinu, the mahout of Howdah Elephant Arjuna.

He is glad that Arjuna has successfully completed his annual task effortlessly. “He is a star performer and next year too, he will be here and all our efforts to take good care of him have paid off,” he said.

“Arjuna had a deep sleep on Friday night after a hard day of procession till Bannimantap. After he returned from the procession, Arjuna was given a hot water bath and he slept after having a good dinner,” Vinu said. 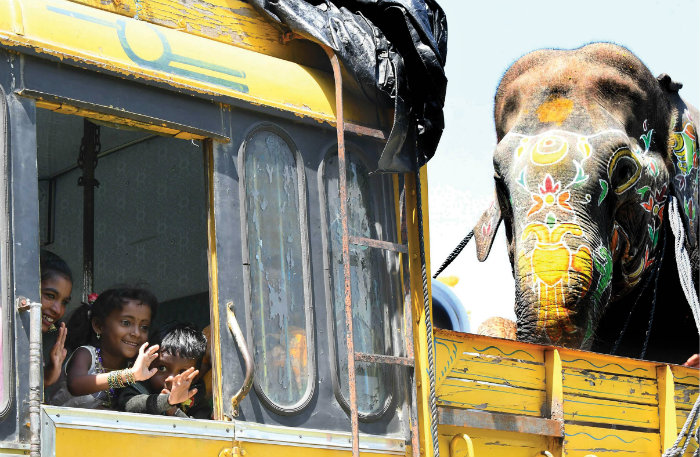 MOMENTS TO BE MISSED

During their stay inside the Palace, it is the family members who make life easy for mahouts and kavadis. Women and children assist in their every task and prepare food. Today as they were leaving, they had smiles on their faces and even waved at the crowd. However, children said that they will miss the moments inside the Palace.

“Here, our children had a relaxed time and everyone who comes here used to talk and play with them. All of us have to go back to the forest now and our children must attend the tribal schools. We also have to work and take care of the elephants as the Forest Department gives us various tasks,” said J.C. Bhaskar, elephant Dhananjaya’s mahout. It was Dhananjaya’s maiden Dasara and he is touted to be the future Howdah Elephant. 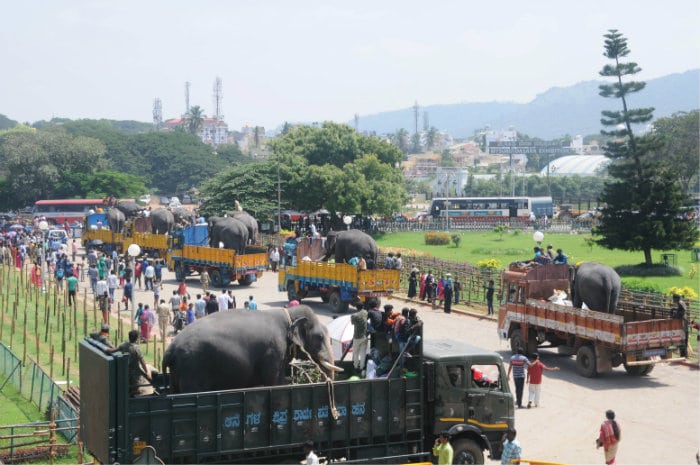 Nishane Elephant Balarama’s mahout Thimma was assaulted by a tourist at the elephant quarters inside the Mysore Palace premises yesterday. The unidentified man tried feeding sugarcane to Balarama when the jumbo was relaxing in his shed.

Mahouts later told reporters that some tourists who come to their place of stay inside the Palace create a nuisance and go near the elephants. “Only we have the rights to feed the elephants and a special diet is maintained. Outside food is not allowed as it is risky. What if something happens to the elephant? That is why we forbid people from giving food to the elephants,” they said.

According to the mahouts, Thimma was not at fault as he was doing his duty. This tourist and his friends did not heed to advice and instead hit Thimma, they said.