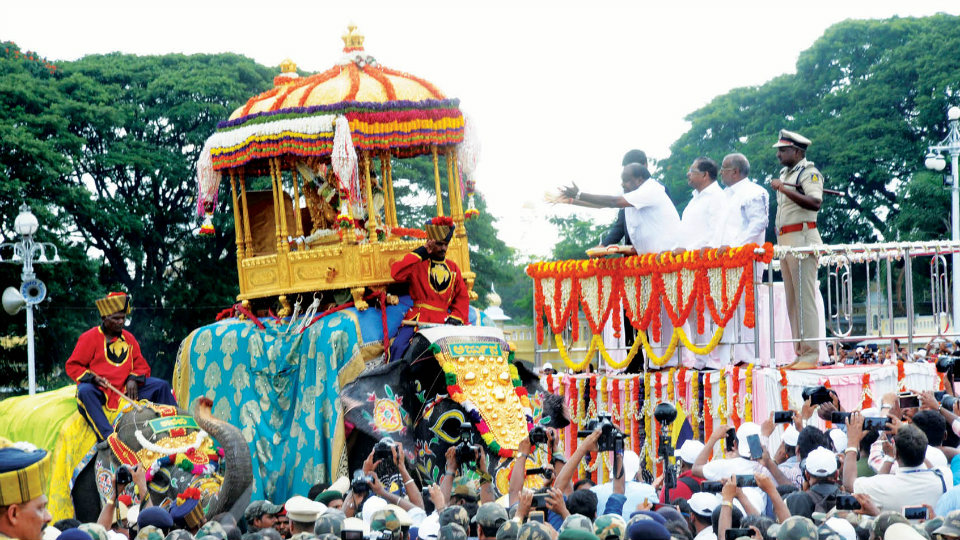 Mysuru:  It was a rare feast as the magnificent cultural extravaganza unfolded at the Mysore Palace here yesterday signalling the culmination of the 10-day Dasara festivities, known for its grandeur and impressive ‘Jumboo Savari’ with elephant ‘Arjuna’ carrying 750-kg Golden Howdah (Ambari) marching majestically to Bannimantap, about 4.5 kms, where Torch Light Parade was held late in the evening.

The procession marked drawing curtains to ‘Naada Habba’ (State Festival). The Vijayadashami procession symbolising the triumph of good over evil and attraction was inherited from the Vijayanagar emperors. It was indeed a royal and elegant event.

The event showcased the cultural diversity of the State rich with diverse folk art forms. Chief Minister H.D. Kumaraswamy flagged off the procession by offering puja to the traditional ‘Nandi Dhwaja’ in front of the Mysore Palace and by offering jasmine flowers to Goddess Chamundeshwari, the presiding deity of this heritage city, placed inside the Ambari on Arjuna in front of the imposing Mysore Palace.

Owing to the death of Pramoda Devi’s mother yesterday morning, the royal family’s adopted scion, Yaduveer Krishnadatta Chamaraja Wadiyar, who was to be the chief guest at the parade from the Palace gates, stayed away from the event. 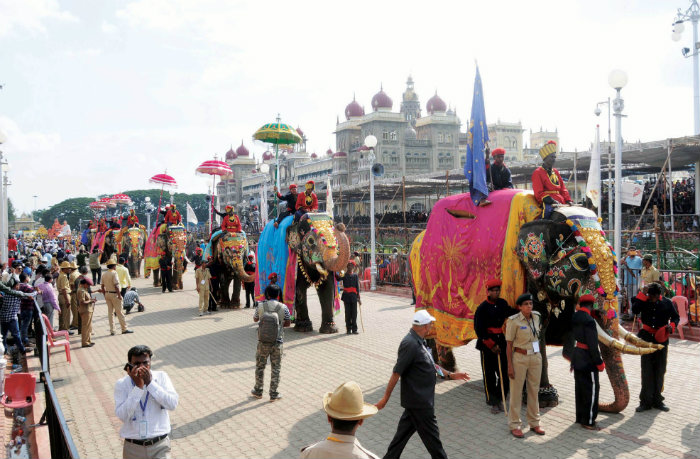 The majestic 58-year-old ‘Arjuna’ was flanked by kumki elephants Varalakshmi and Cauvery. The other pachyderms that took part in the procession were tastefully decorated and proved to be the cynosure of all eyes. While more than 30,000 people watched the start of the procession inside the Palace premises, lakhs thronged the procession route.Caparisoned Naupat elephant Abhimanyu, Nishane elephant Balarama, joined by pachyderms marched in tandem as onlookers cheered them till they exited the Palace and reached Bannimantap Grounds.

Soon after the ceremonial 21 guns boomed, the procession moved on its 4.5 km journey to Bannimantap on the main thoroughfares of the city. After a perfect start in a bright sunshine to the procession which began with cannon carriages followed by famous folk dances of Puja Kunitha, Suggi Kunitha, Kolaata, Pata Kunitha, Huli Vesha, Chit Mela, Kamsaale, Chitki Bhajan, Dollu Kunitha, Jagga Kelige Kunitha, Garudi puppet and other artists entertained the huge crowd that was seen on the either sides of the roads and those perched on buildings and other high-rise places all along the route.

The crowd relished the moments and cheered the cultural troupes, basking in a heritage that has the stamp of regal splendour. Dasara marks a highpoint in Mysuru’s cultural history even as the heritage buildings, monuments, temples, mosques and churches add to its glorious past. 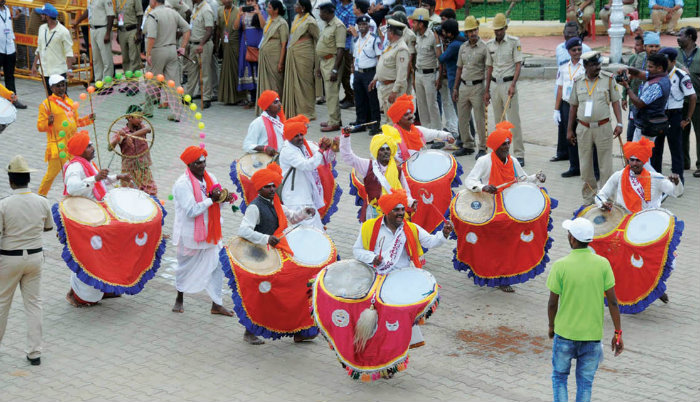 One of the folk troupes perform en route procession.

Scorching heat did not dampen the spirit and enthusiasm of the crowd that had gathered all along the procession route as early as 10 am to watch the procession which was to be held six hours late. As the procession began, the crowds swelled at almost all vantage points along the route. Interestingly, most people were seen capturing the procession moments — photographs on their mobile phones rather than watching it to upload it on social media and send to their loved ones.

In all, 101 units formed for the procession that included more than 50 troupes of folk dancers, cultural artistes, musicians and many platoons of Police force and various bands that were led by Naadaswara artistes.

Folk troupes from across the State stole the show and youths and children had a rare opportunity to learn about the existing forms of folk art that are slowly vanishing. Remarkably, the energy and enthusiasm of all performing artistes stayed intact up to Bannimantap. A break in tradition to facilitate ‘Muhurtha’

Probably for the first time, the tradition of sending the Howdah Elephant first was broken, sending the pachyderm between the procession of 42 tableaux and nearly 48 cultural troupes. For decades, the lead elephant carrying the Golden Howdah would make up the tail-end of the procession. This caused a lot of confusion and the Police had a tough time in controlling the crowd.

The procession was fast forwarded for Chief Minister Kumaraswamy enabling him to launch the Jumboo Savari to complete the ritual within scheduled auspicious ‘Kumbha Lagna’ at 4.13 pm. Thus Arjuna, the Howdah Elephant, which used to be at the end of the procession joined in the middle.

The CM was supposed to offer floral tributes to Goddess Chamundeshwari, placed inside the Howdah, during the Kumbha Lagna between 3.40 pm and 4.10 pm, as per the invitation. However, actually the lagna ended at 4.15 pm.

Arjuna, flanked by Cauvery and Varalakshmi, emerged out of the Palace by 4.45 pm. In the next 15 minutes, the remaining tableaux and the troupes also marched out of the Palace, and the people gathered inside started vacating the place.

Police personnel who had outnumbered the volunteers were seen continuously asking the artistes and tableaux volunteers to move faster. This gave an impression that there were instructions to fast forward the procession because of the delayed ‘Muhurtha’.

By the time the Ambari jumbo arrived at Chamaraja Circle, the crowd breached the barricades and poured into the Circle even as the Police watched helplessly. The Police and the Commandos surrounded the elephants with a thick rope.

Clarifying about the “Muhurtha” confusion,  City Police Commissioner Dr. A. Subramanyeswara Rao told Star of Mysore that the time interval between offering puja to Nandi Dhwaja and Goddess Chamundeshwari idol was very less. Also the number of folk troupes and tableaux were more. Hence, to maintain the time schedule and not to unduly retain the ‘Ambari’ elephant after the puja, the sequence was changed to move the elephant after a few tableaux and folk troupes. He asserted that it was not an error but a need of the hour.

Deputy Commissioner Abhiram G. Sankar clarified that keeping the elephant in a static state with over 750 kg weight on its back was not good for a long time. Defending the alteration of the sequence of the procession, he said that it was not a breach of protocol.