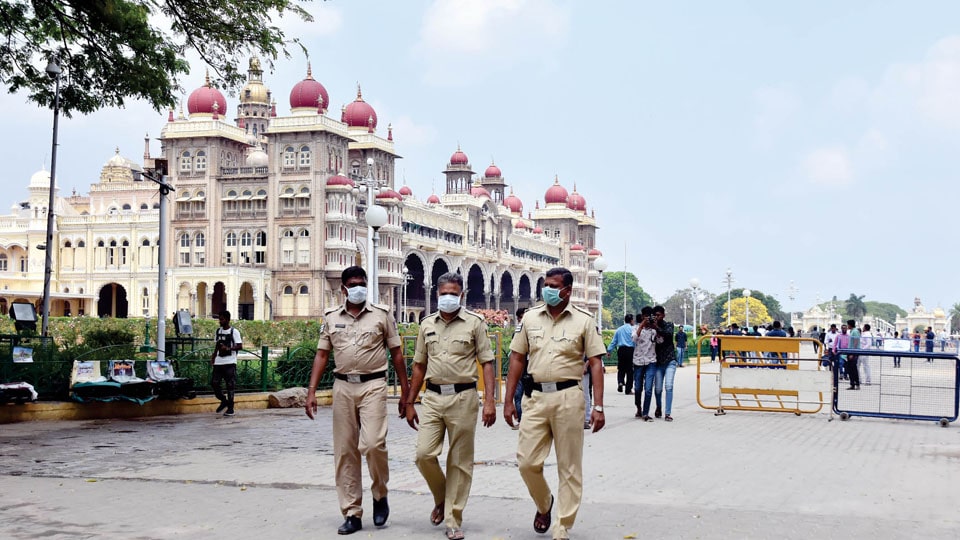 Dasara Executive Committee meeting at Palace Board Office on Sept. 12

Mysore/Mysuru: The first Executive Committee meeting of Dasara-2020 under the Chairmanship of District Minister S.T. Somashekar will be held at the Office of Mysore Palace Board on Sept. 12 (Saturday) at 4 pm to prepare the road-map for Dasara celebrations.

The meeting will deliberate on the preparations for Nada Habba in the wake of the Dasara High Power Committee led by Chief Minister B.S. Yediyurappa deciding to celebrate the festivities in a simple manner. Local elected representatives and district officials will attend the meeting to give suggestions.

Some of the issues which are likely to come up for discussion are: selection of five members from among Doctors, Nurses, Pourakarmikas, Police and ASHA workers to inaugurate the Dasara festivities atop the Chamundi Hill on Oct. 17,   modalities to welcome five Dasara elephants to the Palace, rehearsal within the Palace premises and programmes at Palace on all days and other important matters.

Meanwhile, the DC held a preliminary meeting yesterday ahead of the Executive Committee meeting and discussed with district officials regarding the decisions taken at the High Power Committee meeting held in Bengaluru on Tuesday. Discussions were held regarding refurbishing the Palace premises and Chamundeshwari Temple premises ahead of the festival, welcoming Dasara jumbos, facilities to be given to mahouts and arrangements for rehearsal of the elephants. The outcome of the meeting conveyed by the DC will be placed at the Executive Committee meeting on Saturday.

A team of officials from Departments of Religious Endowment, Forest, Kannada and Culture, Police, Palace Security, Palace Board and others led by Additional Deputy Commissioner (ADC) Manjunathaswamy visited the Palace to take stock of the security arrangements. The ADC has collected all the details to prepare a blue print for the procession to be held on Vijayadashami Day (Oct.26).

The name of Dr. C.N. Manjunath, Director, Sri Jayadeva Institute of Cardiovascular Sciences and Research, Bengaluru, is making rounds as a nominee from the doctors’ fraternity as one of the inaugurators of Dasara.

District Minister S.T. Somashekar, MLAs G.T. Devegowda and L.Nagendra, Mysuru-Kodagu MP Pratap Simha, MLC A.H.Vishwanath and others are learnt to have recommended Dr. Manjunath’s name due to his contribution to check the Coronavirus pandemic as head of COVID-19 Task Force constituted by the State Government.

Dr.Manjunath, a well-known Cardiologist, is offering services to poor people at the Institute.

MLA G.T. Devegowda (GTD) has sought for a permanent Mysuru Dasara Authority to hold the world-famous Dasara festival in a meaningful manner.

The Authority will ensure keeping the city abuzz with cultural activities throughout the year and help in promotion of tourism. It was not a good idea to hold the Dasara meeting in a hurry and decide everything at the eleventh hour, he opined.