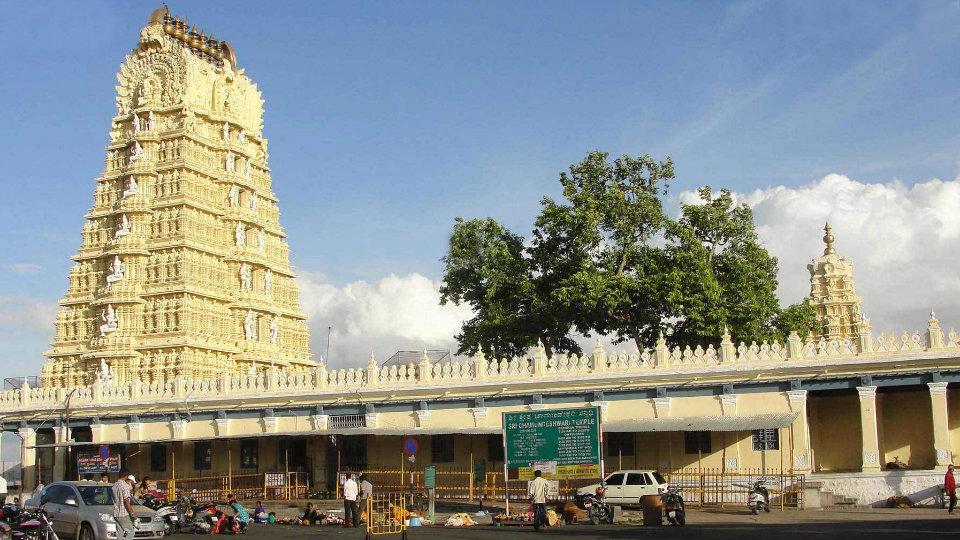 During the meeting, the Temple Executive Officer K.M. Prasad provided information about unauthorised shops which have mushroomed atop the Hill and the DC ordered the Officials to take the help of the Police and clear those shops.

Stating that only 91 shops, among those functioning atop the Hill, had valid licenses, Prasad said that the remaining shops have come up illegally in the temple surroundings, near car parking and near Mahishasura statue. He also complained that pushcarts selling various items had encroached the road causing inconvenience to motorists and devotees.

Replying to Prasad, the DC said: “There were no provisions to set up unauthorised shops in the land belonging to Muzrai Department. We have no objections if the shops have come up on Gram Panchayat land” and reiterated that the illegal shops on the Temple land be cleared by taking the help of Police.

Gates to be installed at five points

Speaking at the meeting, KR Police Inspector Prakash, who informed about the proposal to install five gates at various places, including the Temple Main Road, Tavarekatte, Uthanahalli Road and at the foot of Chamundi Hill, to check activities after 10 pm, said that there was a need to appoint security guards too for the same. Stating that it was also necessary to keep a check on the people visiting hilltop late in the night, Prakash said that only villagers should be allowed to hill after 10 pm.

Reacting to Prakash, PWD Executive Engineer Ravi Kumar said that the process of installation of five gates and construction of security guard chambers were in progress.

View Point: The DC said that many tourists were crossing the retention wall at the View Point to take selfies which may prove fatal and instructed the officials to take steps to control tourists from crossing the retention wall and view the city. He also instructed the officials to take steps to erect grills around the Mantap (Gaali Mantap) on the main road which was repaired after it had collapsed and close the grills during nights.

One-way Road : Tahsildar Ramesh Babu brought to the notice of the DC that there were plans to make the road from Devikere to the Main Road (through the car parking) as one-way, for which survey was conducted on 3.27 acre land and a proposal has been submitted to purchase the land.

Issues related to underground drains, online ticket booking and others were also discussed during the meeting.

Why issue notices to unauthorised shops?

The Deputy Commissioner questioned the officials on why they were not protecting the Muzrai land? Who will control the mushrooming of shops which are being set up by the shopkeepers themselves and whose responsibility is this? Why issue notices when the shops are unauthorised?

DC Randeep said: “Chamundi Hill is a heritage and religious place. I have the rights to decide what to be sold and what not to be sold here. First give me a report on the illegal shops and then clear them by taking the help of Police. Inform me if you are under pressure. I will not provide any opportunity for illegal shops to come up in our limits.”