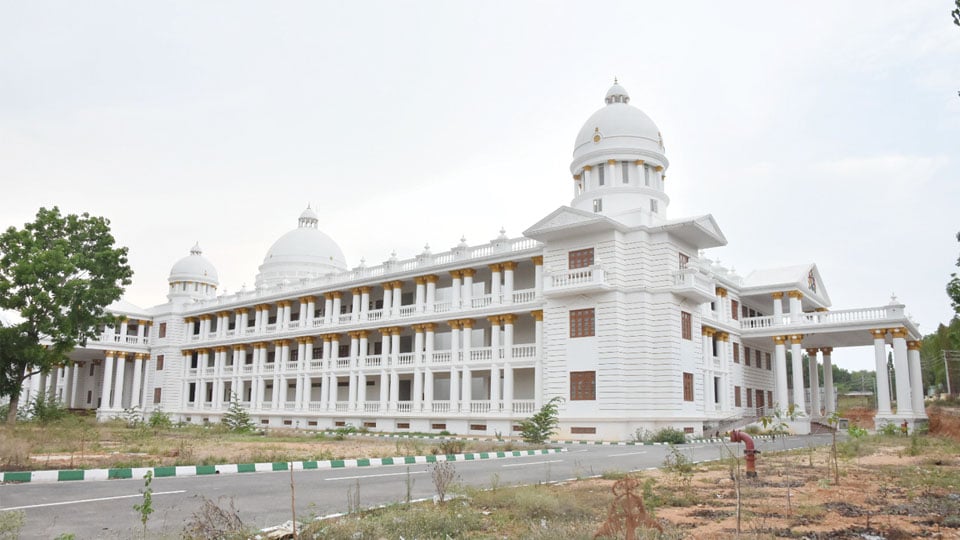 Mysore: The magnificent heritage style multi-crore District Office Complex, which was inaugurated in a great hurry nearly 14 months ago, is lying in a state of disuse.

When Siddharamiah was the Chief Minister, he was keen to have an office complex matching the heritage structures of the city, in his home town, where all the Government Offices are housed under one roof. Hence, the work on this structure began.

As the lease period for the land allotted to the German Press which was under the Central Government had ended, due to the efforts of MP Pratap Simha, the then MLA Vasu and former Deputy Commissioner C. Shikha, the District Administration’s Revenue Department was successful in taking back the land in Siddhartha Layout on Bannur Road.

Siddu’s dream: About two-and-a-half years ago, the then Chief Minister Siddharamaiah, while chairing the District Progress Review Meeting held at the Regional Commissioner’s office on Hunsur Road, had directed the Commissioner to make a plan to construct a full-fledged heritage-type structure with all modern amenities and to bring all the Government Departments in the city under one roof.

He had also directed the Regional Commissioner to find a suitable place, money from the Revenue Department and to entrust the construction of the building to the Karnataka Public Works Department and Ports and Inland Water Transport Department and also stressed that the work should be completed at the earliest.

Later, Siddharmaiah had himself performed the Guddali Puja (ground-breaking ceremony) and also stated that he would only inaugurate the building. 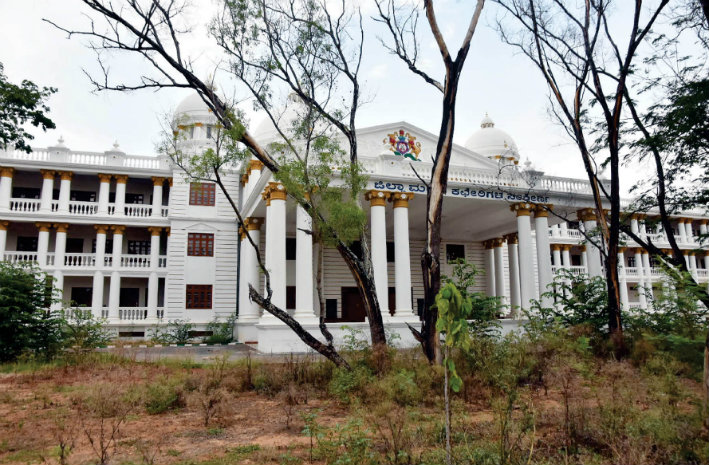 District Minister’s interest: Giving wings to Siddharamaiah’s plan, the then PWD and District Minister Dr. H.C. Mahadevappa had swung into action and got a Rs.59 crore proposal ready from the Department. Then he got the administrative and technical approval for the Detailed Project Report (DPR) and a green signal was given for the construction of the office complex.

Foundation: The construction had been entrusted to Pune-based Shirke Construction Technologies Pvt. Limited after calling for a global tender and on Dec.15, 2016, Siddharamaih himself laid the foundation stone. The massive building, constructed on the lines of Lalitha Mahal Palace hotel in Indo-Saracenic style of architecture, was inaugurated on Mar.10, 2018 by Siddharamaiah again.

Space for 11 Departments: A total of 11 Departments can be accommodated in the new DC Office Complex. While District Registrar’s Office, Treasury and Muzrai Offices will be located on the ground floor, the Deputy Commissioner’s (DC) Office will be on the first floor. Offices of Backward and Minorities Welfare Department, Mines and Geology, Department of Legal Metrology, Fisheries and Excise Departments and Dr. B.R. Ambedkar Development Corporation will be located on the second floor. The building also has two lifts that can hold 12 people at a time and a capsule-type glass lift that have been installed. Since the last 14 months these lifts are lying unused.

Complex unoccupied: The DC Office Complex built at a total cost of Rs.84.66 crore where the eleven Departments will be housed under one roof is still unoccupied — 14 months after the inauguration. As a result, the whole place is dirty with wild grass growing all around and birds building nests.

Second stage of work: Even though the first stage of work is completed, the new building complex is lying unoccupied. The PWD has prepared an estimation of Rs.38 crore for the second phase of development and sent it to the Government.

Shifting to begin in June

The shifting of various Departments to the new District Office Complex will begin in the first week of June, said Deputy Commissioner  Abhiram G. Sankar.

“Though the new building was inaugurated 14 months ago, we did not have the required infrastructure and also the partition was not done. In a few offices, the furniture and computer facilities had not been installed. As we were not yet able to provide basic facilities, the shifting has been delayed. I had visited the complex once and suggested a few changes. In the meantime, the Model Code of Conduct kicked off and hence, I was not able to devote my time and attention. Once the election-related work is over, then the offices will be shifted in stages from the first week of June,” he said. The decision to shift the offices will be taken after holding a meeting with the District Minister and people’s reps, he added.