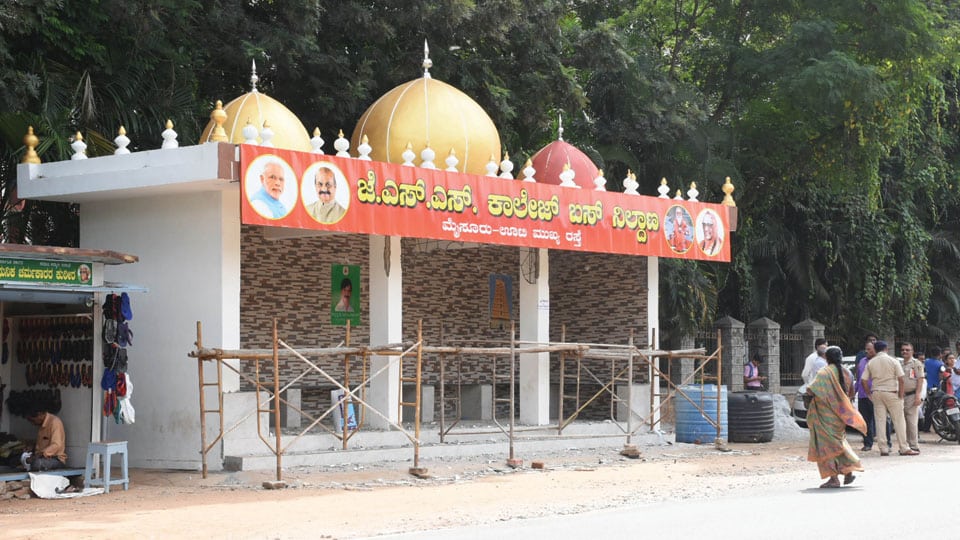 Mysore/Mysuru: Responding to the controversy over dome-shaped bus shelters in his Constituency, Krishnaraja MLA S.A. Ramdas clarified that the idea was to build a bus stand designed like the Mysore Palace.

In a press release, the MLA said that the bus shelters were designed under the funds released by the MLA grant as many areas needed them for public convenience. “Rs. 10 lakh has been released for the bus shelters and the idea is to reflect the heritage character of Mysuru on the lines of the Mysore Palace. This has been grossly misunderstood and I have seen adverse comments on social media and public platforms,” Ramdas said.

“It has been wrongly portrayed in social media that the contractor is a Muslim and he has designed the domes like a mosque. This is highly condemnable and I have written to the City Police Commissioner to act against the miscreants. In fact, Mahadev of Danti Constructions is carrying out the construction and 60 percent of the works have been completed,” Ramdas clarified.

“The construction follows a traditional pattern and is not according to any religion. A technical and expert committee has been constituted to study the designs and if the committee recommends change in the design, we are open to it,” Ramdas said.

On the MP’s remark that the ‘kalasha’ was placed in a hurried manner, Ramdas said that the kalasha was placed soon after the dome was built and not after the MP spoke against it. The MLA has attached a google image that indicates the date of the kalasha installation.

Meanwhile, heritage expert Prof. N.S. Rangaraju has said that the bus shelters do not follow Mohammedan style of architecture. “Rather it is Indian style. It is a wrong notion that the style is Islamic. I would say that the style is peculiar to India,” he said, giving many examples of such styles that prevailed in the Maurya period.

As per the Town Planning Act, all the structures around the Mysore Palace must follow the heritage style of architecture and they must resemble the root structure. “It will be a violation if designs are changed,” he added.